By Christoph Steitz and Jan Schwartz

FRANKFURT (Reuters) – The Porsche and Piech families, who control Volkswagen’s largest shareholder, are prepared to take a direct stake in Porsche AG should the luxury carmaker be separately listed, two people familiar with the matter said.

Such a move would loosen the families’ grip on Europe’s largest carmaker Volkswagen, in favour of direct ownership of the iconic sports car brand, founded by their ancestor Ferdinand Porsche, which dates back to 1931.

Speculation about a listing of the unit earlier this year included estimates of a standalone valuation of Porsche AG ranging from 45 billion to 90 billion euros ($55 billion-$110 billion), compared with 135 billion for the Volkswagen group.

While saying that a possible initial public offering (IPO) of Porsche AG is not high up on the agenda, Volkswagen continues to weigh scenarios for a listing, the people said, adding that the key obstacle remained VW’s complex stakeholder set-up.

That set-up was carefully crafted in the wake of a failed takeover of Volkswagen by Porsche in 2009, which resulted in Volkswagen acquiring the well-known brand while the Porsche and Piech families became VW’s most influential investors.

No decision has been made by Volkswagen on whether to separately list Porsche AG and there is no guarantee that such a move will happen, the people said.

Today, the families hold all ordinary shares of Porsche Automobil Holding SE, which owns more than half of the voting rights as well as a 31.4% equity stake in Volkswagen.

Shares in Volkswagen rose as much as 1.8% to the top of Germany’s blue-chip DAX index following the news. Porsche SE’s stock gained as much as 1.9%.

Selling some voting rights in Volkswagen to co-shareholder Lower Saxony, which holds a 20% voting stake, would be one way for the families to gain direct ownership in the namesake brand while keeping activist investors out, Stifel analysts say.

“We believe this scenario would satisfy all parties,” they wrote, adding that while the families would regain some control of Porsche AG, Lower Saxony would have a blocking minority and unions would be happy about the cash inflow. 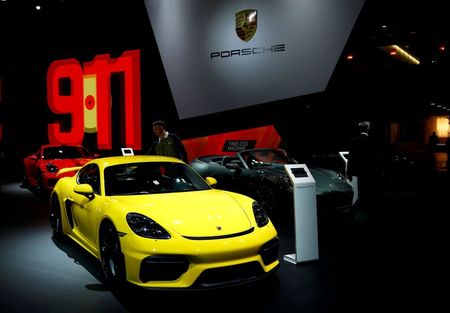 Exclusive – EU exchanges to be made to share trading data to compete with...