MEXICO CITY (Reuters) – Before Petroleos Mexicanos (Pemex) surprised the oil industry last week with plans to take full control of a refinery in Texas, an internal assessment by the Mexican state oil company had concluded it lacked expertise in the refining business.

Pemex’s domestic refining operations have long racked up losses, and the 2019 internal assessment seen by Reuters found the state oil group had failed to take advantage of its nearly three-decade partnership with Royal Dutch Shell in the profitable Deer Park refinery in Texas.

Knowledge that could have been useful to Mexico’s six domestic refineries had not been effectively transferred from Deer Park, the report found.

“Owning the steel does not give the advantage, it’s the skill that comes with it,” said George Baker, a Houston-based consultant and publisher of Mexico Energy Intelligence.

Pemex did not reply to requests for comment and the company has not detailed what new expertise it will receive from the deal, nor how it would be used.

Still, a Pemex source said Deer Park would be a benchmark of efficiency and good practices for its Mexican refineries.

“It will make a great contribution to process knowledge and operational planning,” the source told Reuters.

When Pemex launched the Deer Park tie-up with Shell 28 years ago, transferring expertise was one of the main objectives, said two former Pemex specialists who worked on the venture.

Shell and Pemex had no formal agreement in the past to bring Pemex managers to Deer Park for training that anyone at Shell could recall, said Shell spokesman Curtis Smith.

There will be opportunities in future because the Shell managers now running the Deer Park refining operations are being transferred with the new ownership, Smith said.

“Everyone with a designated role has been asked to stay,” he added. Refinery employees were informed of the transfers the day the deal was announced, he added.

The 2019 assessment also raised concerns over other aspects of the partnership, including how profits are reinvested to allow Deer Park to process a wider range of crudes – not just Mexico’s heavy sour Maya – rather than returned to the owners.

A separate memo seen by Reuters linked to the assessment, marked for the attention of Pemex CEO Octavio Romero, raised the question of whether the government should drop the partnership altogether given the lack of knowledge transfer.

Romero’s office did not reply to a request for comment.

He wants to lift output at domestic refineries and is building a new plant in his home state of Tabasco.

A person with direct knowledge of the acquisition said Pemex should already have had considerable access to the specialist know-how at Deer Park. But that expertise has yet to make an impact on Pemex’s domestic operations, the source added.

Moreover, implementing the transfer of technology, intellectual property or knowledge would be challenging because of differences in how Mexican refineries are run, the source said.

Deer Park has been upgraded to meet U.S. regulations, international quality standards and controls over emissions.

Mexico’s newest refinery was inaugurated in 1979. Planned modernizations of the plants are pending.

Two U.S. sources familiar with Deer Park’s operations said they understood little will change there, and that key workers will teach Pemex best practices in running a refinery.

“There’ll be no change in the way we work there,” the Pemex source said. “If anything, improvements will be sought.”

Last year, Pemex’s refining margins fell again, to an average of $0.76 per barrel. And 46% of its 481 billion peso ($24 billion) annual loss was due to its industrial transformation unit, which controls refineries.

Still, average refining margins turned positive in the second half of 2020. Pemex said the improvement was due to lower crude prices and a better performance at its refining arm.

Only a fraction of heavy Maya crude produced by Pemex can be processed at its domestic refineries; the heavier the crude, the harder it is to convert into fuels like gasoline and diesel.

Even at low utilization rates, the six refineries produce a lot of residual fuel which is difficult to use or export. Last year they operated at just 36.9% of capacity, although in the first quarter of 2021 that reached 44.5%, official data show.

By comparison, Deer Park, which processes up to 340,000 barrels per day of oil into gasoline and diesel, ran at 78.5% of capacity in 2020. This was just below the 78.9% average for U.S. refineries, U.S. Energy Information Administration data show.

Two former Pemex officials who worked on the Deer Park partnership said transferring knowledge south from the United States was a longstanding issue.

“The problem was always Pemex,” said a former Pemex refining executive, who worked for several years on the Shell tie-up. “We would send people to Deer Park and when they returned, Pemex couldn’t implement what they had learnt.” 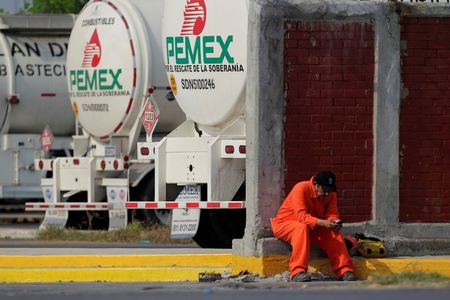