(Reuters) – Russian households withdrew foreign currency worth $9.8 billion from their accounts in March and banks cut new corporate lending by around one third, the central bank said on Wednesday, as western sanctions over events in Ukraine spooked consumers.

“The quarter was difficult, to put it bluntly. It was very worrying at certain moments, but most importantly, the situation managed to stabilise,” said Alexander Danilov, director of the central bank’s banking regulation and analytics department.

“The banking sector faced significant outflow of the population’s funds … at the end of February,” he said. “People took money out of their accounts in a panic, fearing for their safety.”

Funds held in deposits fell by 1.2 trillion roubles ($14.72 billion) in February, the bank said in a monthly report on the development of the Russian banking sector, and the decline continued in March, with outflows of 236 billion roubles.

In contrast to previous reports in this series, the central bank did not disclose banking sector profits.

An economic rebound that revived loans growth and boosted interest in real estate assets saw Russian banks make a record 2.4 trillion roubles of profit last year, but the consequences of Russia’s actions in Ukraine have made any repeat unlikely.

Consumer lending fell by 1.9% in March as the banking sector took a hit from an emergency rate hike by the central bank, rising prices squeezed consumers’ disposable incomes and uncertainty about employment prospects spread, the bank said.

The central bank more than doubled its key interest rate to 20% on Feb. 28 as the first wave of sanctions hit, before trimming it to 17% on April 8. It is expected to lower it further at the next board meeting on April 29.

Mortgage loans volume increased by 2.1% in March to around 300 billion roubles, which the central bank put down to a state-run mortgage programme.

(Reporting by Reuters; Editing by Angus MacSwan and Barbara Lewis) 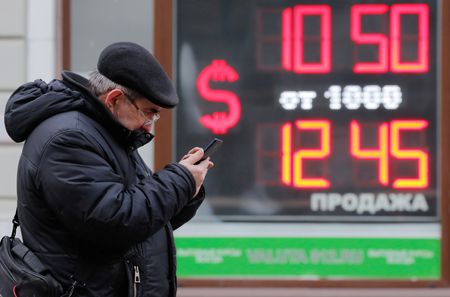 How will the ECB contain fragmentation risk in euro area bond markets?

FTC revs up ‘right to repair’ fight with Harley-Davidson agreement