Clover shares ended trading up 86% on Tuesday as it became the latest ‘meme stock’ to capture the imagination of amateur investors on Reddit and other social media platforms.

The shares had deeply underperformed the wider market and traded below the SPAC’s IPO price since February, when short-selling firm Hindenburg Research accused Clover of concealing from investors a U.S. Department of Justice enquiry into its business.

Clover has said the enquiry was routine and not financially material to disclose. The U.S. Securities and Exchange Commission has launched an investigation into Hindenburg’s claims.

Palihapitiya, one of the most prolific SPAC sponsors, is now sitting on a paper profit of more than 4,000% after Clover shares close to doubled on Tuesday, giving the company a market value of $9 billion and boosting the value of his 21.3% stake in the company, according to Reuters calculations.

A Palihapitiya spokesperson did not respond to a request for comment.

A third of Palihapitiya’s stake in Clover is pledged as collateral to Credit Suisse for a loan, a regulatory filing shows. A six-month lock-up that would prevent him from cashing out on his stake expired earlier this month.

Palihapitiya’s windfall is not just down to the Reddit rally. SPAC managers are awarded warrants and founder shares that result in them owning a much bigger chunk of the combined company that their investment would otherwise entitle them to.

Earlier in June, Palihapitiya launched four new, warrant-less SPACs that are looking to raise a total of $800 million through IPOs, with a focus on buying biotech firms.

(Reporting by Anirban Sen in Bengaluru; Editing by Greg Roumeliotis and Karishma Singh) 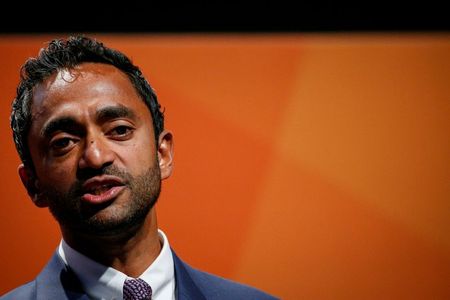 Analysis-Sterling returns to the 1980s, and it may get cheaper still

Lowe’s CFO Denton to step down