WASHINGTON (Reuters) – The number of Americans filing new claims for unemployment benefits increased to an eight-week high in the first week of January amid raging COVID-19 infections, but remained at a level consistent with a rapidly tightening labor market.

The weekly jobless claims report from the Labor Department on Thursday also offered more evidence that the jobs market was at or near maximum employment. State unemployment benefit rolls at the start of the year were the smallest since 1973. There are signs the worst of high inflation is likely over, with producer prices posting their smallest gain in 13 months in December.

“The rise in claims likely reflects an increase in layoffs due to the surge in COVID cases,” said Nancy Vanden Houten, lead U.S. economist at Oxford Economics in New York. “Claims may remain elevated in the near term, but we expect they will gravitate back to the 200,000 level once the Omicron wave passes.”

Initial claims for state unemployment benefits increased 23,000 to a seasonally adjusted 230,000 for the week ended Jan. 8, the highest reading since mid-November. Economists polled by Reuters had forecast 200,000 applications for the latest week.

A surge in coronavirus cases, driven by the Omicron variant, has disrupted activity from airlines to schools as workers call in sick. Unadjusted claims jumped 103,693 to 419,446 last week.

They were driven by surges in New York, which has seen sky-rocketing cases. There were also big increases in filings in California, Florida, Kentucky, Missouri, Tennessee, Texas, Utah and Indiana. But applications fell significantly in Connecticut, Massachusetts and Michigan.

Omicron infections are starting to trend lower in New York and other metropolitan areas. Claims have declined from a record high of 6.149 million in early April 2020 and remain close to their pre-pandemic levels.

Employers are hanging on to their workers, with 10.6 million job openings at the end of November.

The Fed’s Beige Book report on Wednesday of anecdotal information on business activity, collected from contacts nationwide on or before Jan. 3, showed many were allowing part-time work or adjusting qualifications “to attract more applicants and retain existing workforces.”

With more workers getting off unemployment benefits rolls, the labor pool could expand. The claims report showed the number of people receiving benefits after an initial week of aid dropped 194,000 to 1.559 million in the week ended Jan. 1. This was the lowest reading for these so-called continuing claims since the week ending June 2 in 1973.

The government reported last Friday that the unemployment rate fell to a 22-month low of 3.9% in December. The workforce is about 2.2 million people smaller than before the pandemic.

Stocks on Wall Street were trading mostly higher. The dollar fell against a basket of currencies. U.S. Treasury prices rose.

In another report on Thursday, the Labor Department said the producer price index for final demand increased 0.2% last month. That was the smallest gain in the PPI since November 2020 and followed a 1.0% jump in November.

Services prices rose 0.5% after accelerating 0.9% in November. In the 12 months through December, the PPI increased 9.7% after shooting up 9.8% in November.

“Monthly price increases are slowing but still high, and the Fed won’t veer off its path to finish tapering in March and start hiking rates this year,” said Will Compernolle, a senior economist at FHN Financial in New York.

The government reported on Wednesday that consumer prices soared 7% year-on-year in December, the largest gain since June 1982.

With the PPI and CPI data in hand, economists are forecasting that the core personal consumption expenditures (PCE) price index rose about 0.5% in December, which would lift the year-on-year increase to 4.9% from 4.7% in November.

The core PCE price index is one of the measures watched by the Fed for its 2% inflation target.

Inflation is surging as COVID-19 and the recovery from the pandemic have caused bottlenecks in the supply chain. There are hopeful signs that the supply logjam could be breaking up.

“Some softening in China’s PPI will have implications for U.S. inflation by taking some of the edge off core goods prices,” said Bernard Yaros, an economist at Moody’s Analytics in West Chester, Pennsylvania. “Odds are the first place weaker growth in China’s PPI will show up in the U.S. is in import prices, then producer prices, and finally consumer prices.” 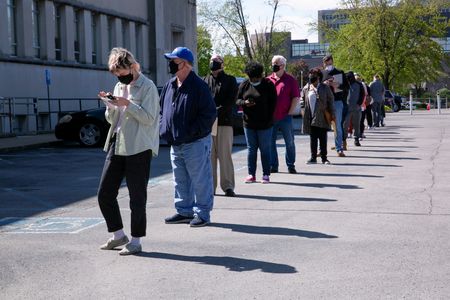 Morgan Stanley CEO to staff: Be back at New York headquarters by September