(Reuters) -Oil rose more than 1% on Thursday after U.S. crude inventories fell more than expected amid high demand for fuel, shrugging off OPEC+’s agreement to boost crude output to compensate for a drop in Russian production.

Prices were also supported by the European Union’s sixth package of sanctions against Russia, which will include an immediate ban on new insurance contracts for ships carrying Russian oil and a six month phase-out on existing contracts.

U.S. crude oil stockpiles fell by 5.1 million barrels, compared with analysts’ expectations in a Reuters poll for a 1.3 million-barrel drop.

The Organization of the Petroleum Exporting Countries and allies including Russia, known as OPEC+, agreed to raise output about 650,000 barrels per day in the next two months rather than the current 432,000 bpd.

“While OPEC+ agreed to increase their production quota by a bit more than the market expected, in reality it does very little to add additional supplies as OPEC+ was already falling short of its existing quotas by over 2 million barrels per day,” said Andrew Lipow, president of Lipow Oil Associates in Houston.

Oil has mostly marched higher for several weeks as Russian exports have been squeezed by U.S. and EU sanctions against Moscow over its Feb. 24 invasion of Ukraine, an action Moscow calls a “special military operation.”

Russian production has fallen by around 1 million bpd following sanctions.

One OPEC+ source familiar with the Russian position said Moscow could agree to other producers raising production to compensate for its lower output but not necessarily making up all the shortfall.

The Kremlin says it can re-route oil exports to minimize losses from EU sanctions, but analysts remain skeptical.

“The extent to which this will prove achievable is questionable, however. Russian oil production is therefore likely to fall again in the coming months,” said Commerzbank analyst Carsten Fritsch, who also questioned OPEC+’s ability to add considerably more oil to the market. 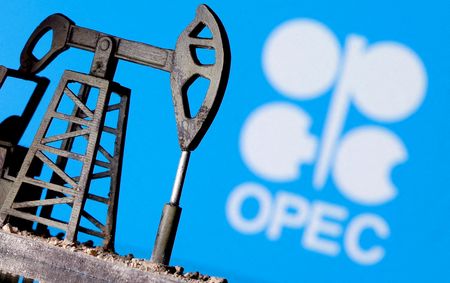 Marketmind: Love is not in the air