The fate of the closely watched shareholder resolutions will show how investors will weigh climate concerns against rising energy prices and Republican criticism of Wall Street’s embrace of environmental concerns.

Staff for New York City Comptroller Brad Lander said the city’s main pension funds would back resolutions on Tuesday at the shareholder meetings of Bank of America, Citigroup and Wells Fargo & Co effectively calling for no new oil or gas lending.

Assistant Comptroller Michael Garland in an interview said climate change poses systemic risk to the funds, and that “there’s no credible path to Net Zero by 2050 unless there is no more investment in new fossil fuel supply.”

A Bank of America spokeswoman referred to a securities filing calling the proposal unnecessary because of other steps it has taken like financing for low-carbon energy sources.

A representative for Wells Fargo, which has made similar arguments, declined to comment.

A Citi representative said it would not comment beyond arguments in its proxy statement arguing against the measure for reasons including that the bank is focused on helping clients transition to lower emissions.

Backing from the fourth-largest U.S. public retirement system will help the measures filed by climate-focused investors including the Sierra Club Foundation and which earlier won support from New York State’s big pension fund.

Top proxy advisors have recommended votes against the resolutions at major banks so far in their main reports to investors. For instance, Institutional Shareholder Services noted that Citigroup has taken steps like banning the financing of arctic drilling. 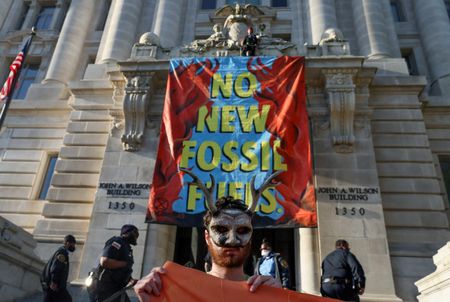 Marketmind: Batten down the hatches