(Reuters) -Nordstrom Inc posted a bigger-than-expected quarterly loss on Tuesday, hurt by price markdowns the department store chain had to initiate due to excess holiday inventory and increasing competition in the retail sector.

The retailer’s shares, which have gained 17% this year, fell 7% in extended trading, as first-quarter sales declined 13% from 2019. In contrast, rival apparel retailer Urban Outfitters Inc reported a 7.3% rise in net sales for the same period.

The drop in sales showed Nordstrom was not recovering as quickly as rivals even as the roll out of vaccines and the arrival of stimulus checks in March boosted consumer spending confidence, analysts said.

“This underlines the fact that Nordstrom has nowhere near dug itself out of the hole it fell into at the start of last year – despite the fact this was a boom quarter for the retail sector overall,” Neil Saunders, managing director of GlobalData, said.

Late arrival of products during last year’s holiday season led to a glut of out-of-fashion products, forcing Nordstrom to take steps including making returns to vendors and marking down prices in the first quarter to clear excess inventory.

The company reported a net loss of $166 million, or $1.05 per share in the quarter ended May 1, compared with estimates of a loss of 57 cents per share, according to IBES data from Refinitiv. 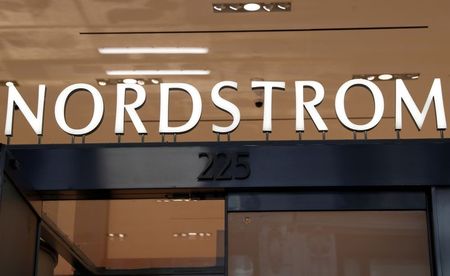