By Clara Denina and Praveen Menon

LONDON/SYDNEY (Reuters) – A top official at the giant Oyu Tolgoi copper-gold mining project in Mongolia has called for greater transparency and more power to the local management, as global miner Rio Tinto looks to buy out the troubled project.

Mongolia owns 34% of Oyu Tolgoi, one of the world’s largest-known copper and gold deposits in the Gobi desert, and Rio controls the rest through its 51% stake in Toronto-listed Turquoise Hill Resources.

Rio Tinto and the Mongolian government in January reached an agreement to end a long-running dispute over a $6.75-billion expansion of the mine which is behind schedule and has run $1.4 billion over budget. Rio waived $2.4 billion in debt that the government owed to it.

Soon after, Rio proposed to buy out the remaining Turquoise Hill stake for about $2.7 billion, paving the way to direct ownership of Oyu Tolgoi.

“As a shareholder of Oyu Tolgoi, we are asking Rio Tinto that this project be transparent and have a proper management structure and without that it doesn’t matter who owns the shares,” said Tserenbat Namsrai, chief executive of Erdenes Oyu Tolgoi LLC, the Mongolian state-owned firm.

“If Rio succeeds in its bid to buy Turquoise Hill it is good for us because the decision making will be shortened, this is the good side (of the deal).”

Speaking to Reuters in an interview, Nagi Otgonshar, Mongolia’s vice minister at the Ministry of Mining and Heavy Industry said they were observing and internally evaluating the outcome of Rio’s buyout offer.

“At the end of the day, we ask Rio Tinto to be transparent … previously not enough information has been shared with the government of Mongolia,” Otgonshar said.

“This is a heavily scrutinized project by the public and being able to share that information with the people of Mongolia is crucial,” he added.

“We think copper is the future and we would like to be one of the top players to attract more investors and OT paves the road for further investments,” he said.

Namsrai said discussions were now underway to bring forward the production date from the current target of mid-2023.

“With the write-off of the $2.4 billion loan the shareholding issue has been resolved and now we are discussing how to improve the Oyu Tolgoi management to shorten the period of sustainable production date,” Namsrai said.

To ensure Mongolia makes a profit out of it, more power needs to be handed to the Oyu Tolgoi management team, Namsrai said, without elaborating on how the government would ensure that.

Namsrai said COVID restrictions in Mongolia, the recent lockdowns in China, logistical issues and changes to domestic labour laws meant they could go over budget again.

“The announced budget increase is …probably likely to go over, although it is difficult to say by how much,” Namsrai said. 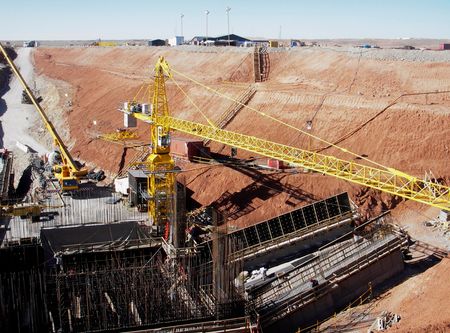