Young wheat plants were blown right out of the ground on the hardest-hit fields, but remaining wheat may be able to bounce back, especially if the plants’ root crowns were protected just below the soil surface. Nonetheless, the crop will need moisture, and near-term forecasts look dry.

“Some acres today no doubt are gone. But there is probably a larger set of acres that have been severely damaged, and the weather we get from here on out will play a role,” Lucas Haag, a Kansas State University extension agronomist, said on Friday.

Kansas is the largest producer of hard red winter wheat, the biggest U.S. wheat class, which is milled into flour for bread. With global food prices at a 10-year high, traders are monitoring crop prospects in the United States, which is among the world’s top wheat suppliers.

Wednesday’s freakish storm brought “Dust Bowl” conditions and gusts of more than 100 mph (161 kph) to parts of Plains, meteorologists said, reminiscent of the U.S. drought years of the 1930s.

Whitened and stripped of leaves, some wheat this week appeared to have been damaged by static electricity from blowing dust, a phenomenon more common in the Dust Bowl years, Haag said.

Farmers should have a better idea of recovery prospects in about 10 days. But the crop’s biggest needs are for moisture and possibly fertilizer, both of which are in short supply.

“With the current conditions and forecasts, and with the high fertilizer prices and availability concerns this spring, all components of the needed wheat ‘rebound’ cocktail (are) in question,” Justin Gilpin, chief executive of the Kansas Wheat Commission, wrote in a market note. 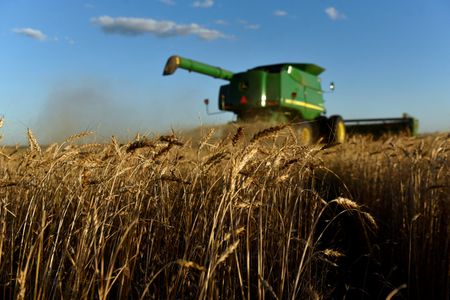 Decline and near fall of Italy’s Monte dei Paschi, the world’s oldest bank