MEXICO CITY (Reuters) – Mexico expects the lawsuit it has filed in a U.S. court against prominent arms makers for negligent business practices will force the industry to change, in spite of companies efforts’ to have the case thrown out, Mexican officials said on Friday.

The Mexican government argues the companies knew their practices had encouraged illegal arms trafficking into Mexico, helping to cause thousands of gangland deaths.

The firms, including Smith & Wesson, Barrett Firearms and Colt’s Manufacturing Co have until Monday to respond to the lawsuit Mexico filed in a Massachusetts court in August, and Mexican officials are confident they are winning the argument.

In a briefing with reporters, officials said that once more facts about the industry became known during the process, firearms makers would have to tighten up their practices.

“After discussions on the motion to dismiss (the lawsuit) are over … we get to the heart of it,” said one of the officials, who spoke on condition of anonymity. “And in the discovery process, I can assure you the companies will self-regulate.”

The official said Mexico expected the companies to say that corruption in Mexico and other failings were to blame for illicit entry of arms into the country, and to use other arguments to deflect from their own responsibility.

Noting that holding arms makers to account had widespread support in Mexico, the official said that if firms tried to pass the matter off as being about Mexican corruption, Mexico would end up talking about corruption in U.S. law enforcement on the border and the role of the National Rifle Association in U.S. politics.

Lawyers for the arms companies did not immediately reply to requests for comment. 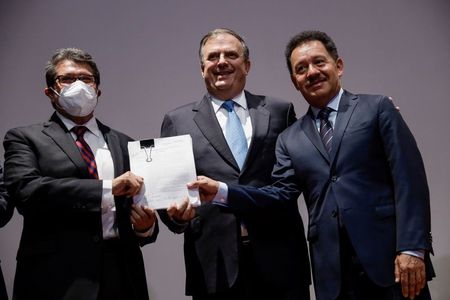 China puts controlling stake of revamped Anbang on the block for $5.2 billion

Latest from the Twittersphere: stock indexes to track most-hyped companies