Home Business Meme stocks start 2023 on high note, though ride is a bumpy...

By Medha Singh and David Randall

(Reuters) -Resurgent risk appetite among some investors is fueling rallies in the shares of so-called meme stocks this month after a crushing year for equities, though many analysts are skeptical the most recent moves will last.

The volatility often associated with meme stocks has been on display this week. Shares of Bed Bath & Beyond, which had soared earlier in the week, fell more than 30% on Friday. The New York Times reported that the company is in talks with private equity firm Sycamore Partners for the sale of its assets as part of a possible bankruptcy process.

The company’s shares are still up 45% this month, after hitting a three-decade low last week when the retailer warned it could seek bankruptcy protection.

Carvana Co shares, meanwhile, are up nearly 50% this month amid heavy short interest, despite reversing some of those gains on Friday. Shares of older meme stocks have joined in the rally, with GameStop Corp up 11% and AMC Entertainment Holdings Inc up around 24%.

A 1,600% rise in shares of GameStop in early 2021 first put the spotlight on meme stocks and the retail investors that helped drive many of their rallies as they coordinated in forums such as Reddit’s WallStreetBets. Though many of those initial rallies have since sputtered, meme stocks have seen a number of short-lived rebounds since then, often coinciding with resurging risk appetite in broader markets.

Signs of easing inflation that some investors believe may push the Federal Reserve to end its rate increases sooner than projected appear to be contributing to the latest moves in meme stocks while also helping push up the S&P 500, which is up 3.5% this year. The index fell more than 19% in 2022.

“When we get a little bit of easing in inflation expectations … risk appetite comes back on and retail investors tend to pile into [meme stocks] in hopes of this lottery-like payoff,” said Garrett DeSimone, head of quantitative research at OptionMetrics.

Meanwhile, the Cboe Volatility Index, known as Wall Street’s fear gauge because it reflects demand for downside protection, was recently at 18.3, near its lowest level since Jan ’22.

Also, “investors who sold for tax reasons in late 2022 might be reinvesting in early 2023,” he said.

Analysts at Vanda Research noted that January and February tend to be among the strongest months for retail inflows.

Market participants are quick to warn that similar rallies in meme stocks – as well as broader markets – have crumbled in the last year. GameStop shares are down more than 75% from their peak, while Bed Bath & Beyond shares, which surged to above $20 last year, quickly reversed those gains. A number of bounces in the S&P 500 last year also crumbled.

Despite the renewed buying from retail investors, “the hurdle to reach previous net-flow highs looks difficult, and any meme stock mania is poised to be short-lived, in our view,” Vanda analysts wrote.

(Reporting by Medha Singh in Bengaluru; Editing by Chizu Nomiyama and Aurora Ellis) 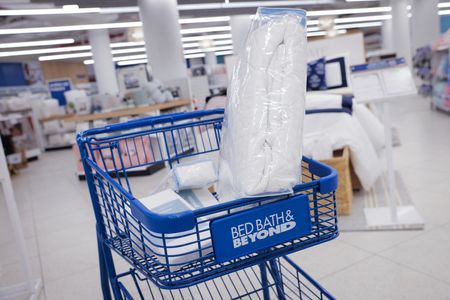