By Elisa Anzolin and Valentina Za

The move comes as Del Vecchio, 86, is engaged in a boardroom spat with Mediobanca over Generali, Italy’s top insurer in which Mediobanca is the biggest shareholder.

The founder of Ray-Ban owner Luxottica and one of Italy’s richest man, Del Vecchio is also a long-time investor in Generali.

He has stoked uncertainty over the fate of both Generali and Mediobanca by building his 18.9% stake in the Milanese bank that used to pull the strings of Italy Inc – a holding currently worth 1.7 billion euros ($2 billion).

Del Vecchio’s holding company Delfin late on Tuesday said it would propose amending Mediobanca’s by-laws at an Oct. 28 annual general meeting to encourage “the creation of value for all shareholders … and ultimately leave the right to directors and shareholders … to decide who should run the bank.”

Delfin added it had no plans to push to replace Mediobanca’s current management and board, whose mandate expires with approval of results to June 30, 2023.

Mediobanca acknowledged the proposal in a note and said it would hold a board meeting in the coming days.

Delfin said it wanted Mediobanca to ditch a requirement in its by-laws stating that up to three directors must be executives who have held that role for at least three years.

Delfin also said it wanted the board to have more independent directors picked from at least two slates of nominees submitted by minority investors.

“We expect the market to favour the first proposal … but the second proposal could have a less market-friendly outcome,” Citi analyst Azzura Guelfi said, noting the influence of other minority investors could be limited if Delfin proposes one of the slates.

After initially criticising the strategy of boss Alberto Nagel, focusing in particular on Mediobanca’s reliance on profits derived from the Generali stake, Del Vecchio has praised Nagel’s latest business plan presented in November 2019.

Del Vecchio and Nagel have locked horns over a project for a Milanese hospital in the past and they are now battling over who should lead Generali.

Mediobanca, which is pushing to keep on CEO Philippe Donnet for a third term, on Monday scored a victory when Generali’s board endorsed Donnet’s reappointment.

Del Vecchio earlier this month struck a pact with fellow businessman Francesco Gaetano Caltagirone, another leading investor in Generali, to push for a change of CEO and strategy.

The power struggle over two prized financial assets like Mediobanca and Generali on Tuesday prompted Italy’s Benetton family, like Del Vecchio and Caltagirone an investor in both companies, to pledge to keep a neutral stance in relation to all of its investments.

By 1318 GMT shares in Mediobanca were up 2%, outperforming Milan’s blue-chip index, with traders citing the stock’s speculative appeal. 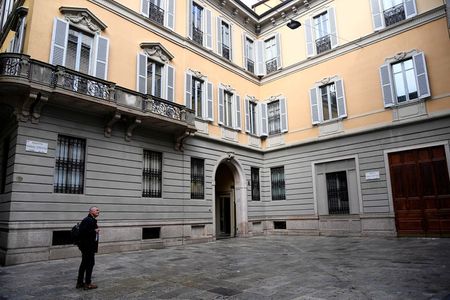 Delta may avoid furloughs thanks to demand for early exit deal