U.S. July retail sales data later on Tuesday could take on added significance after last week’s University of Michigan survey showed consumer sentiment slumped to its lowest in a decade.

Economists polled by Reuters forecast retail sales fell 0.2% after rising 0.6% in June. Any signs that consumer spending faltered by a larger degree given a resurgent Delta variant could prompt yet another market rethink on the taper timeline.

Indeed, a week ago (before Friday’s sentiment survey) markets were confident that the Federal Reserve could discuss dialling back emergency stimulus as early as September given an improving jobs market.

Fed chief Jerome Powell is also scheduled to speak. His words will be scrutinised closely for any more insights on Fed thinking.

Until then turmoil in Afghanistan and concern about rising COVID-19 cases look set to weigh on market sentiment globally. Asian shares declined, European stock market futures are flat to lower, while Wall Street is tipped to open lower later on.

Japan is set to extend its state of emergency in Tokyo and other regions to Sept. 12 as COVID cases spike.

The Kiwi dollar meanwhile slid more than 1% after New Zealand reported a new case of COVID-19, the first since February and a sudden risk to what has been one of the world’s strongest economic recoveries.

That appears to be giving investors second thoughts over whether New Zealand’s central bank will raise rates, as widely anticipated, when it meets Wednesday. The Aussie dollar is weaker too.

In Britain, data showed the number of employees on company payrolls rose by 182,000 in July from June, moving closer to pre-pandemic levels as the economy recovers from its coronavirus lockdowns. 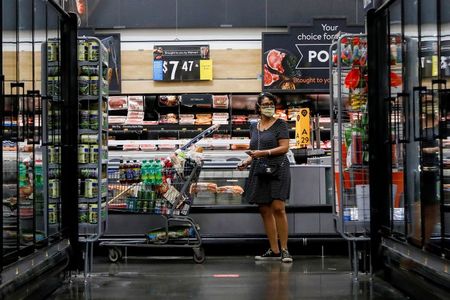