A look at the day ahead in U.S. and global markets from Mike Dolan.

As Americans digest turkey feasts and head to the shops, they may also give thanks that the economy looks better than feared – with questionable implications for investors seeking interest rate relief.

Recession across the developed world in 2023 appears to be consensus thinking among economists parsing the year ahead – and with it, they assume, disinflation and peak interest rates. Asset managers tout a return to beaten-down bonds as a result – even if there’s far less enthusiasm for equity in that environment.

And 10-year Treasury yields fell briefly to their lowest in over a month on Friday.

But the view hinges on economies slowing to a point that drags inflation back down toward 2% targets. So far at least, most incoming economic numbers are less gloomy than forecast.

Judging by Citi’s economic surprise indices, aggregate U.S. surprises remain positive and have been since September. Likewise equivalents for the euro zone, China and the world at large – with UK surprises the most positive since April.

That doesn’t mean economies aren’t slowing or even in recession – just that the data to date means market forecasting, and perhaps pricing, has been too negative on balance.

Of course, that’s all in the rear view mirror. More forward-looking signals from markets are relentlessly dark – with the 2-10 year yield curve inversion in the United States at its most negative in 22 years and Germany’s curve on Friday reaching its most inverted in 30 years.

As Thanksgiving typically sounds the starting bell for the following year’s investment decisions as well as the holiday sales season, retail readouts and related discounting will be crucial for central banks deciding when they can take their feet off the brakes next year.

The backdrop for retailers wasn’t great.

Workers at Amazon sites across the globe, including in the United States, Germany and France, were expected to go on strike on Black Friday. Production of Apple iPhones, meantime, could slump by at least 30% at Foxconn’s factory in Zhengzhou after worker unrest related to COVID curbs disrupted operations.

Far from tightening policy, the economic disruption in China from COVID lockdowns and a property sector bust forced its central bank on Friday to cut the amount of cash that banks must hold as reserves for the second time this year, releasing about 500 billion yuan ($69.8 billion) in long-term liquidity.

The People’s Bank of China said it would cut the reserve requirement ratio for banks by 25 basis points. Earlier it said it would offer cheap loans to financial firms for buying the beaten down bonds of property developers.

Key developments that may provide direction to U.S. markets later on Friday: 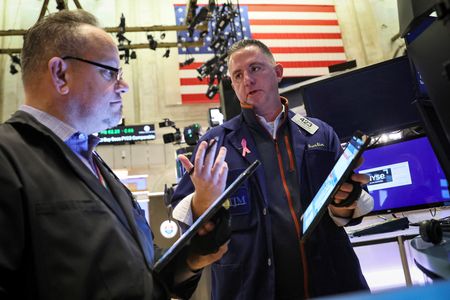 Cryptoverse: After Merge, ether heads for a $20 billion Shanghai splurge

Factbox-How companies account for remote work in their carbon footprints