Home Business Lordstown shares reverse losses after company says it is in talks for...

By Ben Klayman and Chris Prentice

DETROIT/WASHINGTON (Reuters) -Lordstown Motors Corp shares rallied to positive territory on Wednesday afternoon after the electric truck maker said it was in talks with multiple parties to raise funds.

The disclosure came a day after Lordstown warned in a U.S. regulatory filing that there was “substantial doubt” about its ability to continue as a going concern in the next year due to problems in funding production of its vehicle.

Shares of Lordstown were up 2% on Wednesday afternoon. Earlier in the day they plunged as much as 20% as investors awoke to a vastly different financial picture than Lordstown faced last August when it announced it would go public through a reverse merger with a blank-check company.

Lordstown in a Wednesday statement reaffirmed it has “adequate capital to continue operations, meet supplier obligations and begin limited production,” but will need to raise additional funds and was in talks to do that.

“We are debt free, have significant tangible assets and multiple viable avenues to raise capital including asset-backed financing, equity, equity-related or debt financing, loans, as well as potential strategic investments over the longer term,” the company said. “We are already in active conversations with multiple parties to do so.”

Last month, Chief Executive Steve Burns on an earnings conference call said the Ohio company needed more capital to launch its Endurance pickup truck and production this year would be half of prior expectations.

Lordstown’s situation has raised doubts about forecasts the company made on Aug. 3, 2020, when it announced its deal to go public through a reverse merger with special-purpose acquisition company (SPAC) DiamondPeak Holdings. The deal closed in October.

In March, Lordstown’s shares slumped after Hindenburg Research disclosed it had taken a short position on the stock, saying the company had misled consumers and investors on demand for its vehicle.

Short sellers bet the price of a stock will fall by borrowing and selling shares in the hope of buying them back at a cheaper price and pocketing the difference.

Lordstown subsequently said the U.S. Securities and Exchange Commission (SEC) had asked for information related to its SPAC merger and preorders of its vehicles. Burns said Lordstown was cooperating with the investigation.

SEC officials did not respond to a request for comment on Wednesday.

The company is also facing class actions stemming from the Hindenburg report.

On Wednesday, Hindenburg founder Nathan Anderson said in an email: “After months of denials and obfuscation, Lordstown is finally beginning to acknowledge its precarious financial state and its unrealistic production projections.”

RBC Capital Markets analyst Joseph Spak initiated coverage on Tuesday of Lordstown with an “underperform” rating and $5 price target. He believes Lordstown will need an additional $2.25 billion in capital through 2025 to remain solvent and will not break even until 2025, three years after company projections.

Lordstown said options to raise money could include asset-backed financing and investments from strategic partners like other automakers. However, Burns, the company’s largest shareholder, said Lordstown was not for sale.

Lordstown also is hoping to close a deal with the U.S. Department of Energy (DOE) for a $200 million loan to help pay for the costs of retooling its factory. Winning the approval of Energy officials could be key to assuaging some investors’ concerns.

Lordstown has been touting the prospect of the loan since last August and Burns said last month he hopes to complete that process in the next few months. DOE officials declined to comment.

When Lordstown announced the SPAC deal, it boasted its electric truck would be first to market to serve commercial fleet customers. It has affirmed its September launch timeline, but the lower production forecast undercuts the head start Lordstown has on Ford Motor Co, which will launch an electric version of its top-selling full-sized pickup, the F-150 Lightning, next spring.

At the time of the SPAC announcement, Lordstown said it had 27,000 preorders for the Endurance worth $1.4 billion, and it subsequently raised that total to more than 100,000. After Hindenburg’s report, Lordstown said the orders were nonbinding and on Tuesday it said it had no binding purchase orders.

Ford, which is aiming for the same commercial customers, has said it has 70,000 reservations that require a $100 deposit for its truck.

Lordstown said the Endurance will have a starting price of $52,500 before federal EV tax incentives. The price for Ford’s F-150 Lightning will start at just under $40,000.

Investors in the initial SPAC deal included Fidelity Management & Research Co, Wellington Management Co, Federated Hermes Kaufmann Small Cap Fund and BlackRock Inc. BlackRock declined to comment on Wednesday, and officials with the other companies could not be reached to comment. 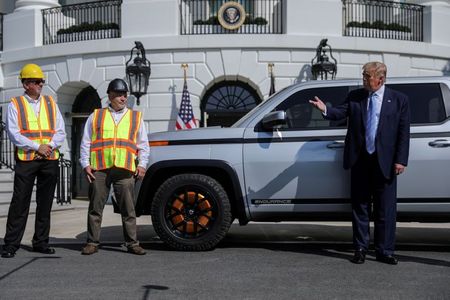 Volkswagen’s Skoda limits some output due to Ukraine, production in Russia still running