(Reuters) – Lockheed Martin Corp, which aims to produce 169 F-35 fighter jets in 2022, is in discussions with the U.S. government to finalize total aircraft deliveries and production rate for the year, the company said in a statement.

“While initial discussions indicated 169 aircraft in 2022, we will provide a production range when finalized,” the U.S. weapons maker said.

The U.S. government is Lockheed’s biggest customer, accounting for three quarters of its sales last year.

Lockheed provided an estimate about its F-35 production plans at a conference hosted by brokerage Bernstein earlier this week. (https://reut.rs/2SaueFF)

The company is expected to deliver between 133 and 139 jets in 2021. Lockheed has said it expects the production rate for the jets to eventually plateau at about 175 aircraft per year.

(Reporting by Ankit Ajmera in Bengaluru; Editing by Shinjini Ganguli) 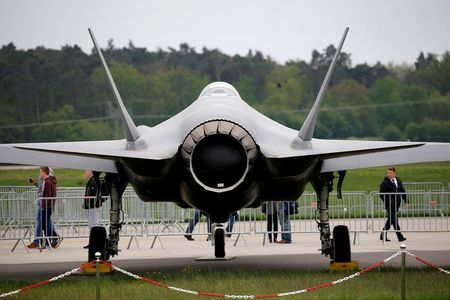