KUMTOR MINE, Kyrgyzstan (Reuters) – Authorities in Kyrgyzstan said they are in full control of the giant Kumtor gold mine after taking over management of the mine from Canada’s Centerra Gold which has taken legal action over the seizure.

Kumtor, the largest foreign investment project in Kyrgyzstan, was operated by Centerra Gold until last month when Kyrgyz lawmakers passed a law giving the state power to temporarily take control of the mine and appoint “external management” to address alleged environmental and safety problems.

The move came months after nationalist politician Sadyr Japarov, a long-time supporter of Kumtor nationalisation, won a landslide victory in a presidential election in January.

“All units are working without interruptions at the moment,” Nurdin Usenov, acting chief production officer at the mine, told reporters during a government-sponsored media tour to Kumtor last Friday.

Centerra Gold said this week its Kyrgyz units, Kumtor Gold Co and Kumtor Operating Co, had commenced bankruptcy proceedings in a U.S. court following the nationalisation of the mine by the former Soviet republic.

Kyrgyzstan has a long history of disputes with Centerra Gold over how to share profits from the country’s biggest industrial enterprise.

Dinara Kutmanova, the head of state environment and climate committee, said during the media tour the operator of one of the world’s highest-altitude mines had damaged nearby glaciers by dumping more than a billion tonnes of waste rock there.

“If you look at our operating activities … it’s approved annually by the government’s regulatory authorities and related agencies and they’ve never asked us to make any changes to the way we operate the mine,” he told Reuters in an interview.

“Unfortunately I have to say that it really appears to be a concerted effort to falsely justify a nationalisation of the mine.”

Centerra said bankruptcy proceedings would prevent further efforts by the Kyrgyz government to strip Kumtor Gold of its assets or otherwise “improperly dispose” of the Kumtor mine in violation of its investment agreements with the company.

The company had earlier initiated international arbitration proceedings against Bishkek. 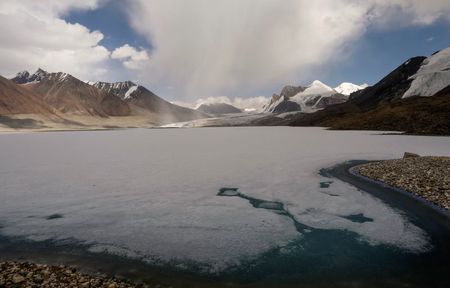 U.S. may weigh up exemptions to ban on financing fossil fuel projects abroad-official