(Reuters) -Krispy Kreme reported a jump in revenue for the first quarter of 2021 as the doughnut chain readies its return to the stock market after five years, against the backdrop of rising demand for sugary snacks during the pandemic.

The company reported revenue of $321.8 million in the quarter ended April 4, compared with $261.2 million a year earlier, according to a filing for an initial public offering (IPO) that was made public on Tuesday. (https://bit.ly/3yUuGbK)

The company was bought by privately owned JAB Holding Co in a $1.35 billion deal in 2016, when the investment firm was ramping up its bets on coffee and restaurant businesses.

After being cooped up at home for more than a year, vaccinated Americans are picking up their daily orders at fast-food restaurants, coffee houses and doughnut chains.

Sales have picked up at most fast-food chains in the United States, after struggling with operations limited to delivery and drive-thrus for over a year, helped in part by stimulus checks that have boosted spending.

Known for its glazed sugary treats, Krispy Kreme opened its first store in North Carolina in 1937 when it started selling doughnuts in local grocery stores. It now sells its treats in grocery and convenience stores in the United States and operates shops in 30 countries.

Krispy Kreme plans to list its shares on Nasdaq under the symbol “DNUT”. 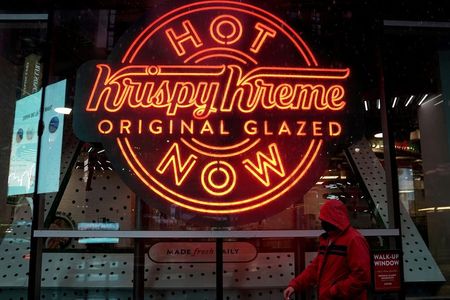 BMW to resume production at some plants

How a Columbia professor became the scourge of activist short sellers