(Reuters) -Kellogg Co on Thursday warned a workers’ strike at its U.S. cereal plants could dent annual profit as the Froot Loops maker braces for an end-of-year period likely to be impaired by supply issues.

A workers’ union on Wednesday rejected a revised offer on pay and benefits from the U.S. packaged foods maker, extending a month-long strike of about 1,400 workers across its four cereal plants.

While Kellogg has been able to bring in temporary hires, the plants are not operating at full capacity, raising concerns among analysts that supplies of some of America’s popular cereals could be constrained in the coming months.

“(Union members) are not willing (to) take any major concessions that Kellogg is proposing during a time of economic growth,” Dan Osborn, president of the local union in Omaha, said on Thursday. Kellogg has pushed back against those claims.

It “might get worse if (the) strike drags on”, Credit Suisse analyst Robert Moskow said.

Cereals accounted for around 40% of Kellogg’s net sales last year.

“We have one particular area that is more challenging than others, and that’s our cereal business, and that’s obviously being compounded because of the strike,” Chief Executive Steve Cahillane said on an earnings call.

The Pringles maker said the labor and supply issues could mean its fiscal 2021 adjusted profit growth forecast would be at the low end of its 1%-2% range, adding that the cost inflation was the highest the company has “seen in a decade or more.”

Packaged food makers, including Kraft Heinz Co and Conagra Brands Inc, have been wrestling with higher costs of raw materials such as corn and edible oils, as well as rising freight expenses due to container and driver shortages.

Meanwhile, Michigan-based Kellogg forecast fiscal 2021 organic net sales growth, which assumes a “reasonable conclusion” to the strike, of 2% to 3%, up from its prior 0%-1% range.

(Reporting by Deborah Sophia and Praveen Paramasivam in Bengaluru; Editing by Maju Samuel and Arpan Varghese) 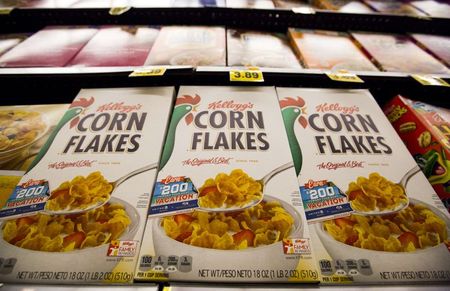 Siemens Energy to pay dividend as cost discipline pays off

Shell plays down risk of stranded oil and gas reserves