LONDON (Reuters) – A deadly uprising in Kazakhstan triggered by a fuel price hike is a powerful reminder of the struggle governments face in trying to limit public subsidies of fossil fuels when expensive energy has stoked inflation.

Most countries have measures in place to shield consumers and companies from the full impact of energy costs and to boost domestic fossil fuel industries. Many have a mix of both.

But policymakers trying to reduce the fiscal hit from vast subsidy bills on strained public finances as is the case in many emerging markets have to balance the risk of social unrest against the need for reform.

“It would have been easier before, when we had lower energy prices, but now that energy prices have surged it is much more difficult,” Mark Mateo at the Organisation for Economic Cooperation and Development (OECD) in Paris said.

“One of the effects of this is social unrest, and that has not just happened in Kazakhstan, it has happened in a lot of other places.”

Data compiled by the OECD showed governments across 192 countries spent $375 billion on fossil fuel subsidies in 2020 – less than half the amount a decade earlier. The trend has been downward, bar an uptick in 2018, driven chiefly by a rise in oil prices.

The reduction in overall subsidy bills masks the importance of fossil fuel subsidies across emerging markets. Wealthier oil-producing nations such as Kuwait, the United Arab Emirates and Saudi Arabia subsidised fossil fuels to the tune of nearly $500 per capita in 2020, data from the International Energy Agency https://www.iea.org/topics/energy-subsidies showed.

In terms of percentage of GDP, the hit is harder for less wealthy nations such as Libya at more than 15% of output or Venezuela, Uzbekistan, Algeria or Iran where it amounts to nearly 5% or more.

In Kazakhstan, where a New Year’s Day fuel price hike has triggered violent unrest, subsidies account for 2.6% of GDP.

Consumer subsidies, favoured in many emerging economies, are a blunt tool intended to protect individuals. The bill for governments is big, the International Monetary Fund has said repeatedly.

It also hinders efforts to cut budget deficits and competes with other needs, such as public spending on roads, schools and healthcare, while adding to inequality as richer households benefit disproportionately because they consume more.

Nigeria has said it will remove longstanding fuel subsidies by mid-year, replacing it with 5,000 naira ($12.12) monthly payments to the poorest families as a transport subsidy.

Energy costs also make up a larger share of inflation baskets in many developing nations compared with developed ones, compounding inflation pressures from food price gains and spurring central banks into rate hikes from Russia to Brazil.

“Emerging markets have always been susceptible to seeing a social backlash on the back of rising prices,” said Daniel Moreno head of emerging markets debt at Mirabaud. “Gas, food prices, public transport it can be absolutely anything.”

High grain prices are among the factors cited as triggers of the Arab Spring uprising a decade ago.

Social unrest over energy prices is not exclusive to emerging economies. A fuel tax increase set off France’s 2018 yellow vest protests, although underlying issues were often deeper rooted and diverse – as they are in Kazakhstan.

For oil-producing nations, the financial costs are somewhat offset by the boost to demand, although that is a negative as the world seeks to wean itself off fossil fuel and subsidies are under mounting pressure from public support to combat climate change.

The chasm on this issue between emerging and developing nations was apparent at the U.N. climate summit COP26 in November.

Fuel subsidies were a major sticking point https://www.reuters.com/business/cop/china-saudi-seek-block-anti-fossil-fuel-language-un-climate-deal-sources-2021-11-12 with large developing nations such as China and Saudi Arabia objecting to wording that requests governments unwind public financial support for oil, gas and coal.

Many analysts predict an increase in social unrest as policy makers struggle to navigate.

Around the world, riots, general strikes and anti-government demonstrations https://www.reuters.com/world/pandemics-protests-unrest-grips-developing-countries-2021-07-28 have already increased by 244% over the last decade, the 2021 Global Peace Index found. Changing economic conditions in many countries will raise the likelihood of political instability and violent demonstrations, researchers for the index say.

In Ecuador, protests sparked by the removal of transport fuel subsidies in 2019 https://www.reuters.com/article/us-ecuador-protests-idUSKBN1WT265 forced the government to re-introduce the support shortly afterwards. 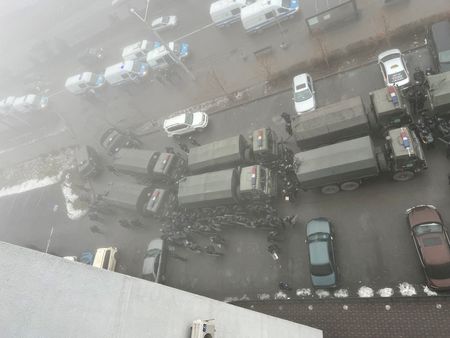 How McLaren aims to rebuild supercars to roar into electric era