(Reuters) – Britain’s JD Sports said on Tuesday it was not searching for a new chief executive officer or chairman, two days after a media report claimed the sportswear retailer was stepping up succession planning due to pressure from investors.

The Times report https://www.thetimes.co.uk/article/succession-planning-is-stepped-up-at-jd-sports-9p07s2dvz on Saturday said institutional investors were uneasy about Peter Cowgill’s joint roles as JD Sports’s executive chairman and CEO over the past several years.

The Times quoted Cowgill as saying that his dual role was common in the United States, and denying that he was planning to leave or to hand over some responsibilities. “I’m definitely not going anywhere,” he told the Times.

JD Sports’s online business performed well through the pandemic, prompting the company to announce in April that it would resume dividends after beating analyst expectations for full-year profit.

The company has embarked on at least three big acquisitions in the United States and Europe in recent months.

JD Sports had in January acknowledged investor concerns regarding the cash-based nature of the long-term incentive plan and bonus payments for executive directors, following its annual general meeting where a third of shareholders voted against the remuneration policy.

(Reporting by Vishwadha Chander in Bengaluru; Editing by Ramakrishnan M.) 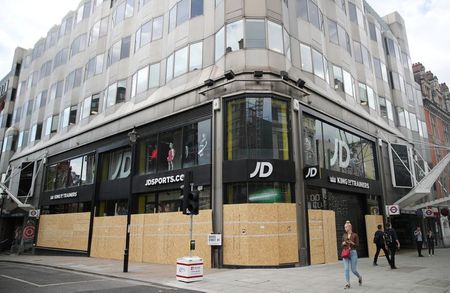 Dollar ticks down, euro up ahead of U.S. CPI report