(Reuters) -JD Sports Fashion raised its annual profit forecast for the second time in four months on Wednesday as shoppers splashed out on sportswear during the holidays and U.S. consumers spent their stimulus cheques on the latest trends.

Britain’s biggest sportswear retailer, which has expanded in the United States during the pandemic with the purchase of streetwear retailer DTLR Villa and Shoe Palace, shrugged off supply chain disruptions and new COVID-19 restrictions.

“With sports and fashion fans showing a willingness to queue around the block to get their hands on the latest styles, sales should remain buoyant even as belts are tightened elsewhere.”

Shares in the FTSE 100 company rose as much as 4.8%, before reversing to trade down 1.7% by 0915 GMT as it also said earnings for the year ended January 2023 would be in line with the current year and “revert more to historic norms”.

JD Sports, which has been embroiled in a lengthy tussle with Britain’s antitrust watchdog over its purchase of smaller rival Footasylum, has seen demand rise since lockdowns were eased and people started visiting its stores again.

Like-for-like revenue for the 22-weeks to Jan. 1 was up 10%, it said, without giving details on top-selling lines.

It said the U.S. government’s fiscal stimulus in the first half of 2021 might have contributed up to 100 million pounds to its annual earnings. 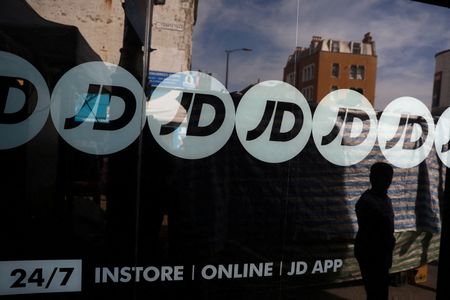 U.S. railroad Amtrak CEO to step down next month

Factbox: Chinese developers that missed or are set to miss offshore...