By Andrea Mandala and Valentina Za

MILAN (Reuters) -Italy’s Banco BPM said on Friday it planned to acquire full ownership of its insurance partnerships as part of a new multi-year plan that aims to achieve net profit of more than 1 billion euros ($1.2 billion) in 2024.

The new profit target and quarterly results, which were both ahead of analyst expectations, drove shares in Italy’s third-largest bank up as much as up 5.6%, outperforming a 1% rise for Milan’s blue-chip index.

Banco BPM will exercise rights to bring in house its insurance joint-ventures with Italy’s Cattolica, which was recently acquired by Generali, and Britain’s Aviva.

Banco BPM also runs a consumer finance business in tandem with France’s Credit Agricole, while it relies on Anima, of which it owns 19.4%, for asset management.

The Italian bank is taking its lead from Intesa Sanpaolo, which has weathered a tough environment of negative interest rates better than other banks thanks to its wealth management and insurance businesses.

UBI, another mid-sized player like Banco BPM, had also planned to bring insurance in-house before receiving an unsolicited takeover bid from Intesa.

Banco BPM, created in 2017 from the merger of two regional cooperative banks, wants to make net fees its main profit driver, growing 8% annually on average over the 2021-2024 period to more than offset stagnating net interest income.

Overall revenues are projected to rise 2.4% a year.

The new net profit target compares with the 649 million euros Banco BPM made in 2019, before the pandemic.

“The focus Banco BPM puts on its ‘product companies’ and especially those in ‘bancassurance’ we believe may contribute to improve the value of the group in an M&A scenario”, Bestinver analyst Fabrizio Bernardi said.

Banco BPM has been has looking for a merger partner after mid-tier rival UBI was snapped up by Intesa last year.

CEO Giuseppe Castagna has failed to agree a deal with BPER Banca and said on Friday consolidation had paused.

“We’re very happy to be ‘standalone’ now because we’ve got ambitious targets to reach”, he said.

He added Banco BPM would continue to pay attention to every possible merger opportunity.

With its roots in the wealthy Lombardy region, Banco BPM is widely seen as the perfect geographical fit for UniCredit, which is under pressure to boost its domestic footprint and catch up with Intesa, but last month walked away from the acquisition of state-owned Monte dei Paschi.

Castagna said Banco BPM had no interest in Monte dei Paschi or Banca Carige, another rescue candidate, because their size did not fit with his bank’s plans.

It set a 40% dividend payout ratio under the multi-year plan, which analysts see as conservative, leaving the bank with a capital buffer for potential deals. 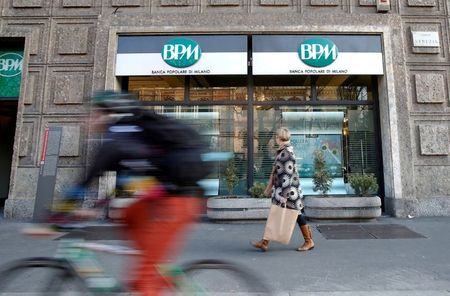