ROME (Reuters) -An Italian court on Monday sentenced the former owners of the Ilva steelworks, Fabio and Nicola Riva, to 22 and 20 years in jail respectively for allowing it to spew out deadly pollution.

Once the largest steel producer in Europe, the factory emitted a lethal cocktail of carcinogenic dioxins and mineral particles for more than half a century, that medics say caused a surge in cancer in the adjacent city of Taranto.

Wrapping up a trial that lasted five years, a Taranto court also handed prison terms to 24 ex-managers at Ilva, consultants and local politicians, including the former head of the Puglia region, Nichi Vendola, who received a 3-1/2 year sentence.

All the defendants have the automatic right to two appeals before a sentence becomes definitive.

The Riva brothers have denied wrongdoing and their lawyers said they had spent heavily to respect environmental norms.

“The Riva family has constantly invested large amounts of capital in Ilva in order to improve the plants and operate in compliance with the regulations,” lawyer Luca Perrone said.

Vendola issued a statement denying any wrongdoing and saying he would appeal. “It is like living in an upside-down world, where those who have worked for the good of Taranto are condemned without a shred of evidence,” he said.

City mayor Rinaldo Melucci welcomed the ruling, saying for years Taranto had suffered a “massacre” for the sake of profit.

“Today the Italian State has recognised the suffering of Taranto, recognises the abuses that are being carried out for the sake of steel,” he said in a statement.

Ilva took root in Puglia, the heel of Italy’s boot, in the 1960s as part of a government drive to industrialize the impoverished south.

At its peak, it produced more than 10 million tonnes of steel a year, but magistrates intervened in 2012 and said it had to be cleaned up or shut down, alleging the Riva family had allowed an environmental disaster to unfold.

A 2016 report by the regional health authority highlighted Ilva’s impact on Taranto.

It showed lung cancer death rates were some 30% higher than normal in districts near the plant, while deaths from respiratory illnesses were as much as 50% above average. Ilva workers were 41% more likely to develop stomach cancer and 72% more likely to get pleural cancer.

The government took control in 2015 to safeguard some 16,000 jobs and reached a deal to sell the plant to ArcelorMittal in 2018. However, this is being renegotiated, with the state likely to become the main shareholder as environmental concerns remain.

The court on Monday said the plant must be confiscated, however this will only be executed once the lengthy appeals process is exhausted. 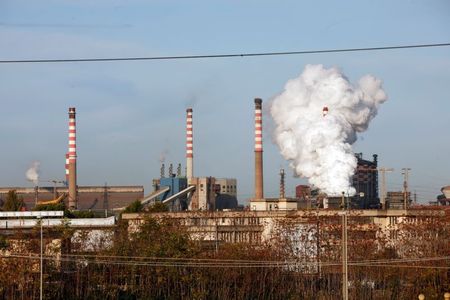 A look at the day ahead in markets from Anshuman...

E.ON cuts value of Nord Stream 1 stake by more than half