(Reuters) – Investor William Ackman, whose views are widely watched on Wall Street, said on Thursday that the U.S. central bank’s ultra-easy monetary policy has created a “classic bubble” and that he thinks the Federal Reserve will need to tighten rates more quickly to fight inflation.

“We are in a classic bubble which has been driven by the Fed,” Ackman, who runs hedge fund Pershing Square Capital Management, said at a conference sponsored by S&P Global Ratings.

Ackman was speaking days after the government announced that U.S. consumer prices in October surged 6.2% over the last 12 months, outpacing many economists’ forecasts.

“Every indicator is flashing red,” Ackman said, citing surging prices in real estate, the art market and the stock market.

He called inflation the biggest risk for his hedge fund this year and said he expects the central bank will have to raise rates soon, echoing warnings he made on Twitter several weeks ago.

“I think the Fed will be forced to tighten much more quickly,” Ackman said, adding that he does not see much reason to keep interest rates at their current low levels, arguing that easy monetary policy was not bringing people back into the workforce.

He also said higher prices are being fueled by structural changes and that recent increases may not be transitory, as some policy makers, economists and many corporations have said.

ESG initiatives, including a switch to cleaner energy and demands for higher wages, are here to stay and are costly, Ackman said, noting they will fuel higher prices for some time.

Ackman said on Twitter last month that he had been invited to give a presentation to the Federal Reserve Bank of New York to share his views on inflation and that he said policy makers should “taper immediately and begin raising rates as soon as possible.”

He said again on Thursday that he has hedged his portfolio, fearing higher rates could negatively impact the hedge fund’s long-only equity portfolio. Ackman’s Pershing Square Holdings Fund has returned 26.1% since January after a 70.2% gain last year. 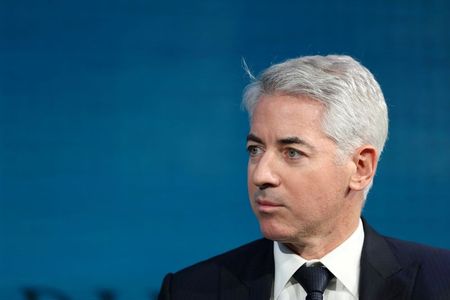