MILAN (Reuters) -Italy’s Intesa Sanpaolo said it would get in top shape for a new business plan due in February by offloading problem loans, after meeting its 2021 profit target ahead of time.

Intesa indicated instead it would use the money to write down loans in the final quarter of the year, when it will focus on preparing for a new business plan.

Under the current four-year plan Intesa has shed 34 billion euros ($39.37 billion) in impaired loans, surpassing its goal by 8 billion euros.

Exposure to the country’s myriad small businesses and Italy’s chronically stagnating economy have made soured loans the Achilles’ heel of Italian banks.

In the third quarter, provisions at Intesa fell a larger-than-expected 44% from 2020, when the bank put aside nearly 1 billion euros to prepare for future damage on its loan book from COVID-19.

Messina noted the outlook was now different thanks to the strong post-COVID rebound for which Italy was poised, helped by the boost from European Union recovery funds.

“We’ll continue to work … to create a starting point to the new plan that can allow us to be really a Nordic bank in terms of provisions,” he said, referring to banks known for their low ratios for problem loans.

Net profit in the January-September period totalled 4 billion euros ($4.6 billion), matching the minimum goal Intesa had set for the year, which it now expects to surpass.

“A solid set of results but … may not be enough to push the stock on from here,” Jefferies said, noting Intesa’s shares, unlike those of several peers, offer no discount compared with the value of the bank’s assets.

Shares closed down 0.4% against a 0.6% rise in the banking index, a performance attributed by Messina to the relatively expensive valuation of the company’s shares.

“We’re one of the best banks in Europe and investors expect a lot of us,” he said.

The less severe than expected fallout from the pandemic so far has allowed European banks like BBVA, BNP and HSBA to announce share buybacks, an option which Messina said Intesa could consider under the new plan.

However, Intesa would first set a new payout goal and a minimum capital buffer to hold on top of regulatory thresholds.

Intesa, whose share price draws support from the bank’s high dividend yield, confirmed a 70% payout ratio over 2021 results, down from 75% this year.

Third-quarter net profit came in at 983 million euros, well above a Reuters-compiled consensus of 850 million euros.

Revenue totalled 5.09 billion euros, above the expected 4.93 billion euros, thanks mostly to a strong performance from trading activities, where income tripled year-on-year.

Income from the lending business fell 6.1% annually due to negative interest rates, compounded by tough competition and slowing credit growth in Italy after a boom fuelled by state guarantees.

Messina said, however, that companies were resuming investments and this would drive lending going forward.

Intesa said its board had approved paying a 1.4 billion euro cash interim dividend on Nov. 24, bringing the dividend yield for the year to 8.3%. 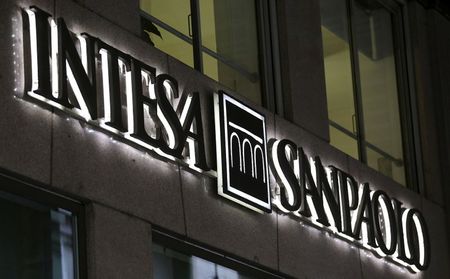