NEW YORK (Reuters) – U.S. consumer prices accelerated in May as gasoline prices hit a record high and the cost of services rose further, suggesting that the Federal Reserve could continue with its 50 basis points interest rate hikes through September to combat inflation.

The consumer price index increased 1.0% last month after gaining 0.3% in April, the Labor Department said. Economists polled by Reuters had forecast the monthly CPI picking up 0.7%. In the 12 months through May, the CPI increased 8.6% after rising 8.3% in April.

Excluding the volatile food and energy components, the CPI climbed 0.6% after advancing by the same margin in April. The so-called core CPI increased 6.0% in the 12-months through May. That followed a 6.2% rise in April. Inflation by all measures has far exceeded the Fed’s 2% target.

STOCKS: Futures tracking the S&P 500 index tumbled on Friday after data showed consumer prices rose more-than-expected in May. BONDS: U.S. 10-year yields rose to the highest since May 9, two-year yield touched highest since November 2018. FOREX: The dollar index rose to a three-week high after the CPI data.

“Inflation this past month was certainly hotter than expected and a reminder that inflation will be with us for longer than we previously expected. But there are some signs within the economy that ultimately inflation should start to slow, and the Fed will likely do whatever it takes to keep raising rates and reduce inflation over the coming 12 to 18 months.”

“Inflation keeps climbing and it’s becoming more entrenched. Today’s consumer price index (CPI) numbers were even worse than expected with a 8.6% year-over-year increase, the highest of the entire year, and even core inflation came in higher than expected at 6.0% vs. 5.9% expected.”

“Inflation is measured across a number of categories and the price increases in the report were broad-based, indicating it is not due to any one particular cause such as supply chain bottlenecks or the war in Ukraine.”

“The Fed is going to face increasing pressure to get inflation under control and will need to raise interest rates by at least 0.5% for the next three meetings and by the end of the year, they are going to need to reevaluate their balance sheet reduction plans, in order to increase them.”

“While we don’t expect a recession this year and have been positioning accordingly, there is much to be concerned about in terms of higher interest rates, higher volatility, and lower liquidity.  Because of those headwinds, we have maintained a defensive posture, with lower duration and higher quality in fixed income and lower beta, less growth and less high P/E exposure within equities.”

“The hotter-than-expected CPI numbers continue to add fuel to concerns over how aggressive the Fed will have to be to tame this.”

“What this likely does is change the calculus for what the Fed might do in September vs. what they might do next week. By that I mean, you have most-assuredly a 50-bps rate hike coming next week and an equally high percentage chance that this is what we will see in July.”

“Both numbers are a little worse than expected suggesting this is going to be a more extended process to bring it under control. People were looking for a quicker end to the inflation situation. It’s not going to happen.”

“The surprise increase in headline inflation to 8.6% in May, from 8.3%, together with another strong rise in core prices raises the odds that the Fed will need to extend its series of 50-bps rate hikes into the fall, and even opens the door to a larger 75-bps move at next weeks FOMC meeting.”

“The most important question for investors and the markets is whether the central banks are going to take the economy into recession to conquer inflation.”

“This is a worry because so far profits have held up this year. The bear market is really about valuation so far because of rising bond yields. But I think the worry is now we’re going to have a double problem – we’re going to have a profit squeeze as well, because if the economy slows down then obviously, you’re at risk of a profits recession.”

“The sell-off will transform from a valuation sell off to a profit sell off.”

RYAN DETRICK, CHIEF MARKET STRATEGIST, LPL FINANCIAL”Today, the inflation data was disappointing. Many hopes for a peak are now dashed as the reality that higher energy prices continue to impact overall inflation. And a peak will just have to wait.””This does little to give the Fed cover to not be as aggressive. This likely suggests the Fed will continue to be quite hawkish to combat the seemingly never ending string of higher inflation that we continue to see.”

“The fears over inflation and the potential impact of profits in corporate America are adding to the worries for investors here. Just another black eye for the market. There’s very little good news in today’s inflation data, and it’s causing stocks another market sell off today.” “It likely cements a 50 basis point at least the next two to potentially the next three meetings with the highest inflation since 1981.”

“Obviously, the numbers were higher than expected but most due to high energy costs and that is a problem for now, but going forward we should see some relief there as demand begins to wane possibly during the summer months.”

“These are ugly numbers, but higher energy prices should mean less use of energy and that should cool off inflation.”

“Disposable income will be cut back and obviously it all point to recession. I’d say we’ll probably be in a recession in the fourth quarter of this year with confirmation in the second quarter of 2023.”

“I see a short and sweet recession, just a cooling off period and that’s going to be due to the consumer pulling back.”

(Compiled by the Finance and Markets Breaking News team) 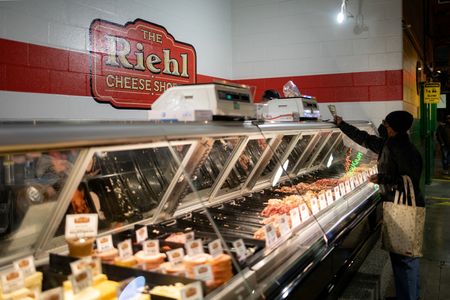