BERLIN (Reuters) – The Indonesian, South African and Mexican finance ministers expressed support on Thursday for an overhaul of international tax rules to make companies pay their fair share in a more globalised and digitalised business world.

G7 finance ministers agreed on Saturday on a system to make multinational companies pay more tax in countries where they operate, alongside a minimum global corporate tax rate of at least 15%.

“This year, nations have a historic opportunity to end the race to the bottom in corporate taxation, restoring government resources at a time when they are most needed,” the five ministers said in the article, published in newspapers including the Washington Post and Frankfurter Allgemeine Zeitung.

“To pave the way to that goal, we endorse an initial understanding that the global minimum tax rate must be at least 15 percent, as agreed upon by the Group of Seven countries last week,” they wrote, adding that they were confident the minimum rate could “ultimately be pushed higher”.

The current international tax system had eroded national sovereignty and put the working class at a disadvantage, they said.

“Together, we can ensure that global capitalism is compatible with fair tax systems and that governments are able to tax multinational corporations,” they added.

They urged all other countries involved in negotiations to work together and reach an agreement before finance ministers from the Group of 20 major economies meet in July. A G20 sign-off would in effect give the deal a worldwide reach.

G20 member China is among countries that have voiced objections to a global minimum corporate tax rate of at least 15%, people familiar with the negotiations said. 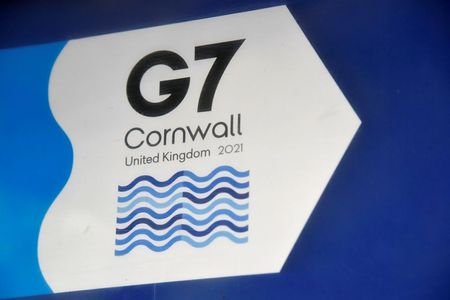 Biden says VTB, other Russian banks to be sanctioned

Analysis-For Fed’s Powell, 2019 remains the touchstone for a post-pandemic economy