LISBON (Reuters) -Spanish fast fashion giant Inditex said sales in May and so far in June were twice as high as in the same period last year as customers splashed out on post-lockdown shopping sprees.

The strong sales for May 1 to June 6 for the owner of brands including Zara, Bershka and Stradivarius came despite stores operating with 10% less trading hours due to pandemic-related limitations.

“Week after week we are seeing store traffic recovering,” Chairman Pablo Isla said during a conference call, adding: “We are seeing a progressive recovery.”

The post-lockdown spike mirrored results from rivals including Next and Abercrombie & Fitch Co., although some industry analysts have forecast that the uplift could be temporary as high savings rates may dampen spending.

National statistics agencies data showed retail sales in Europe, China and the United States surged in March, but stalled in April as a burst of activity after the easing of restrictions was stymied by rising prices and COVID-19 uncertainty.

Inditex saw a two-thirds increase in online sales in the first quarter compared to the same period in 2020, with store traffic also up as COVID-19 related restrictions in key markets including Britain, Germany and France were loosened.

Isla did not give an estimate for how he expected online sales to evolve as shops opened fully, instead emphasising the long-term balance between online and in-store.

“You cannot expect for the full year these rates of growth for online. We believe very much in this fully integrated approach between stores and online much more than focusing on the specific rate of growth of any of the two areas,” he said.

Inditex’s net profit for its first quarter period of February to April was better than expected at 421 million euros ($513 million), but still down on last year’s fourth quarter profit and a third below pre-pandemic levels.

Earnings before interest, tax, depreciation and amortisation (EBITDA) were down 27% on 2019, but Inditex beat expectations of analysts’ polled by Refinitiv, who had estimated a net profit of 359.29 million euros and EBITDA of 1.17 billion euros.

While revenue for the quarter reached 4.9 billion euros, 48% more than the same period in 2020 when Inditex booked its first ever quarterly loss, it was still well short of 2019.

Shares in Inditex, which this month regained February 2020 levels for the first time since the start of the pandemic, fell slightly to 31.67 euros at 1058 GMT.

Inditex said its tagging system for stock helped keep inventory 5% below 2019 levels and gross margin high at 59.9%, enabling it to sell nearly all items at full-price, Isla said. 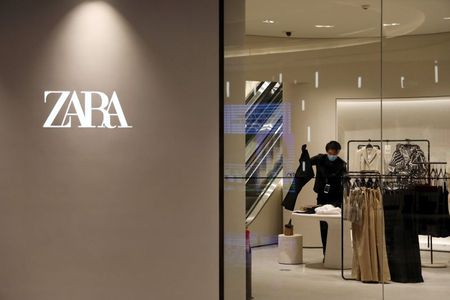 Disney CEO, asked if company is ‘too woke,’ says it will cater to audience

H&M sales miss as retailer struggles to compete with Zara