The special purpose acquisition company, or SPAC, which had filed for a $250 million IPO in March, did not give a reason for the cancellation of the IPO in a regulatory filing on the move. A Barrack spokesperson declined to comment.

Barrack, who chaired Trump’s inaugural fund and was a frequent guest at the White House, was arrested on Tuesday and charged with illegally lobbying the Trump administration on behalf of the United Arab Emirates. He denied the charges through his spokesperson.

SPACs are shell companies that raise funds in an IPO with the aim of merging with a private company, which becomes public as result. They have become a popular alternative to a traditional IPO, though investor interest has cooled in recent weeks after some of the deals ended up performing poorly.

A TI Capital Management spokesperson did not respond to a request for comment.

Barrack founded telecommunications infrastructure-focused private equity firm Colony Capital in 1991, which was rebranded as DigitalBridge Group Inc. He stepped down as DigitalBridge’s chief executive in 2020 but remains a non-executive director.

(Reporting by Niket Nishant in Bengaluru and Chibuike Oguh in New York; Editing by Maju Samuel and Dan Grebler) 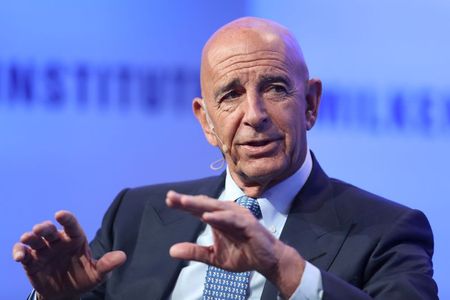 Factbox-Who’s who in Italy’s Generali drama

Smartphone shipments within China down 31.8% year-on-year in Feb -govt data

Exclusive-UniCredit widens search for buyers to sell out of Russia –...