HONG KONG (Reuters) – Hong Kong’s retail sales climbed for the seventh straight month in August, helped by a stabilising COVID-19 situation, an improved labour market and economic recovery and thanks to a boost from a consumption voucher scheme (CVS).

“The CVS should continue to bode well for local consumption sentiment in the rest of the year,” a government spokesman said, referring to electronic vouchers given to certain consumers to spend in shops.

In volume terms, retail sales in August grew 10.6% from a year earlier compared with a revised 0.7% surge the previous month.

Online retail sales in August jumped 16.5% in value year-on-year compared with a revised growth of 28.8% in July.

Sales of jewellery, watches, clocks and valuable gifts, which before the pandemic relied heavily on tourists from the mainland, climbed 28% in August versus a revised 26.3% surge in July, the data showed.

Clothing, footwear and allied products rose 40.1% in August against a revised 30.9% growth in July.

Tourist arrivals in August soared 143% from a year earlier to 10,811 after three straight months of decline. That compared with a 57.9% drop in July.

“Keeping the epidemic under control remains pivotal to a full-fledged recovery of the retail sector and the overall economy,” the spokesman said, adding it was essential to strive towards more widespread coronavirus vaccinations.

Seasonally adjusted unemployment rate slipped to 4.7% in the June-August quarter, the lowest since January-March period in 2020. 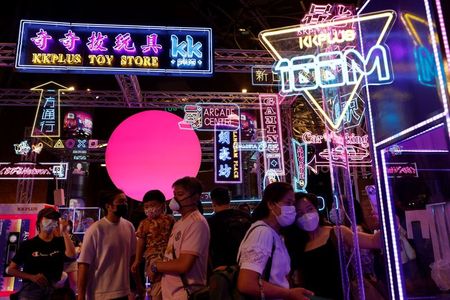 EasyJet to cut 4,500 jobs to stay competitive after crisis

U.S. policymakers seize on FinCEN leaks to press for stepped up money-laundering fight

Fed tiptoes towards the taper stage months before the curtain call