HONG KONG (Reuters) – Hong Kong’s retail sales jumped 11.7% in April from a year earlier, ending two consecutive months of declines, with the rebound helped by a receding COVID pandemic and the disbursement of government’s consumption vouchers.

The retail sector has been under pressure particularly after the financial hub imposed stringent restrictions to curb the coronavirus, although the government expects the sector to pick up as cases decline and measures are eased.

“The retail sector should continue to recover provided that the local epidemic situation remains stable,” a government spokesman said, adding that a consumption voucher scheme and other government measures would lend more support.

In volume terms, retail sales in April rose 8.1% from a year earlier, compared with a 16.8% decline in March.

For the January to April period, the value of retail sales fell 3.1% from the year-ago period while volume dropped 6.1%.

At the beginning of this year, Hong Kong implemented its strictest anti-virus measures as the Omicron variant triggered a dramatic spike in infections, with businesses hit hard by widespread closures.

The city’s economy contracted 4% in the first quarter from the same period a year earlier, ending four quarters of recovery.

The unemployment rate rose to 5.4% in the February-April quarter, the highest since the April-June quarter in 2021.

Sales of jewellery, watches, clocks and valuable gifts, which before the pandemic relied heavily on tourists from the mainland, rose 13.9% in April following a revised 35.9% drop in March, the data showed. The border with mainland China remains largely closed due to COVID.

Clothing, footwear and related products increased 1.6% in April against a revised 41.4% drop in March.

Online retail sales were a bright spot, surging 34.8% year-on-year in April in value terms after a revised 31.2% growth in March.

Hong Kong eased COVID restrictions further in May as cases eased, reopening beaches and swimming pools, and extending hours for bars, while restaurants are allowed to serve eight people per table, up from four. 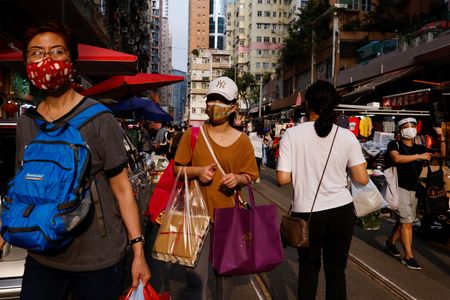