BRUSSELS (Reuters) -Dutch brewer Heineken stuck to its 2022 profit margin forecast on Wednesday after a sharp jump in first-quarter beer sales and prices cheered investors despite added uncertainty from the conflict in Ukraine.

Driven by a steady loosening of coronavirus restrictions, particularly in Europe, Heineken’s beer volumes rose by 5.2% on a like-for-like basis from the same period last year, beating the 3.5% average forecast in a company-compiled poll.

The increase in Europe was 11.5%, with beer sales in bars and restaurants almost tripling.

Overall, the world’s second-largest brewer also raised the average income per litre by 18.3% through direct price increases, consumers trading up to more expensive beers and a shift in sales from supermarkets to bars, resulting in a 24.9% boost to revenue.

Heineken shares were up 3.3% at 92.30 euros by 0900 GMT, among the top performers in the FTSEurofirst 300 index of European blue-chip stocks.

He added that the news bodes well for the rollout of new products such as Heineken Silver and said the consumer shift towards more premium beers was another positive development.

“Raising the price on premium products won’t be met with as much consumer kickback as it would on a value offering,” he said.

The Dutch maker of Heineken, Sol and Tiger lagers and Strongbow cider said that Russia’s invasion of Ukraine had brought additional uncertainty to the global economic outlook and commodity markets.

“We expect mounting inflationary pressures to impact household disposable income and a consequent risk to beer consumption later in the year,” Heineken said in a statement, echoing a view first expressed in February before Russia invaded Ukraine in what Moscow calls a “special military operation”.

Heineken said it was benefiting from hedging positions taken in 2021 but faced rising costs, supply chain challenges and pressure from its decision to leave Russia.

For all that, however, the company maintained its guidance of “stable to modest” improvement to its operating profit margin in 2022.

Heineken had said in February that spiralling inflation could lead to lower beer consumption, casting doubt on its plan to raise its operating margin to 17% in 2023.

The Dutch brewer said then that input costs would rise by a mid-teens percentage rate, with barley double its price of a year ago and aluminium up by about 50%. Energy and freight costs have also risen sharply. 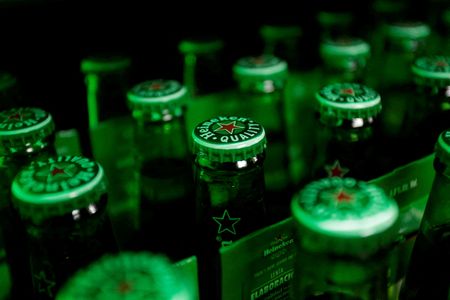