LONDON (Reuters) -Investment banks are ratcheting up bets on euro zone interest rate hikes in the months ahead, a day after the European Central Bank took markets by surprise with a more hawkish than anticipated stance on surging inflation.

Deutsche Bank now expects the ECB to deliver two, hefty 50 basis point rate hikes this year after kicking of a tightening cycle with a quarter-point move in July.

Morgan Stanley said that following Thursday’s ECB meeting, it had revised up the size of the tightening expected at the September meeting to 50 bps, while adding an additional 25 bps hike in October to its new rate call.

The ECB ended a long-running stimulus scheme and said it would next month deliver its first interest rate hike since 2011, followed by a potentially larger move in September.

With inflation at a record-high 8.1% and still rising, the ECB now fears that price growth is broadening out and could trigger a wage-price spiral, heralding a new era of stubbornly higher prices.

“Our new ECB hiking baseline is +25bp in July, +50bp in September, +50bp in October and +25bp in December,” Deutsche Bank analysts said in a note released late Thursday.

“The deposit rate will be 1% by year-end, lifting it to the lower end of the range for estimates for the nominal neutral rate.”

While ECB chief Christine Lagarde had already flagged a series of rate hikes in recent comments, the tone of the ECB’s comments on Thursday took markets by surprise.

And that triggered a further ratcheting up of rate-hike bets in financial markets, which were already aggressively priced.

Money market futures now suggest that almost 150 bps worth of ECB tightening is priced in by year-end, up from 140 bps just after Thursday’s ECB statement and around 135 bps on Wednesday.

And 75 bps worth of hikes are priced in by the September meeting, suggesting that traders too expect the ECB to move by 50 bps at that meeting after a quarter-point move in July. They had already moved in this direction ahead of Thursday’s meeting.

Danske Bank said on Friday it had also now changed its rate call and expects a 50 bps hike in September, with 25 bps moves expected at other meetings.

“Risks are still skewed to more than one 50bp rate hike but with the current very uncertain outlook we expect the economic outlook to dampen the medium-term inflation pressure, paving the way for a 25bp hike ‘only’,” Danske said in a note.

The ECB’s deposit rate is at -0.50% and the central bank last hiked rates in 2011. Like other major central banks, the ECB is facing an unanticipated inflation surge.

The likes of the U.S. Federal Reserve, Bank of Canada and more recently, the Reserve Bank of Australia have hiked rates by a hefty 50 bps. 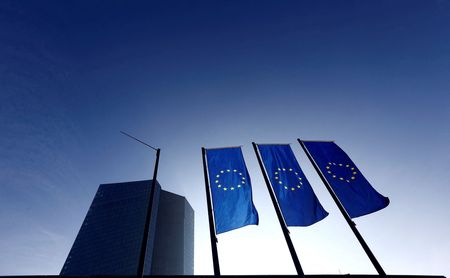 Carbon fee on the table for climate policy -Biden adviser

Oil rally to continue in 2022 as demand outstrips supply, analysts...