Home Asia Growth in China’s home prices set to slow in 2021 on policy...

By Liangping Gao and Ryan Woo

Authorities have stepped up measures to rein in China’s red-hot property market this year, including caps on banks’ lending to the sector, upper limits on developers’ debt ratios and restrictions on purchases.

Average residential property prices are estimated to rise 3.5% in 2021, according to 10 analysts and economists surveyed by Reuters recently.

“The tightening of property control policies, especially for mortgage loans, has prompted the growth of housing prices to slow down,” said Liu Yuan, a research director at property broker Centaline Group.

This month, more than 20 cities, including Beijing and the southern city of Dongguan, strengthened their curbs on the sector, including home purchase restrictions and caps on prices for reselling.

Beijing this time has showed unprecedented determination to tighten policies, said Nomura analysts in a note.

“It has attached national strategic importance to reining in property bubbles, directly intervening in the credit supply for the property sector, and has left little scope to dial back these curbs,” according to Nomura.

Survey respondents are concerned China could face an economic downturn, high unemployment and even systemic financial risks if authorities maintain its current tightening stance on the sector.

The biggest downside risk is that the rapid tightening of credit could result in a debt crisis for some real estate companies, creating systemic financial risks, said Daniel Yao, head of research for China at JLL, a commercial property services provider.

Housing investments by developers are estimated to rise 8% this year, marginally higher than 7% in the June poll.

Developers will accelerate the completion of projects in 2021 in the hopes of boosting their capital with sales, said Huang Yu, vice president of China Index Academy, a Beijing-based property research institute.

New construction starts will remain high this year, she said.

Most respondents said regulators will further tighten credit and restrictions on the sector, such as the introduction by more cities of pricing references for resale homes to control prices, and the implementation of pilot programmes for a property tax in more cities.

(For other stories from the Reuters quarterly housing market polls:) 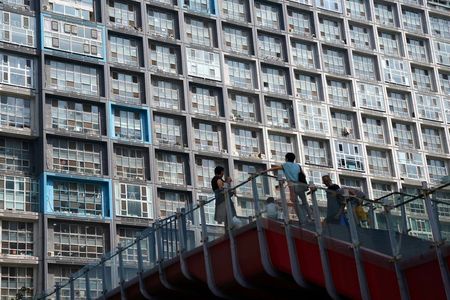 Top U.S. oil refiner Marathon Petroleum to lay off 12% of...