A report by the Institute for Supply Management (ISM) showed U.S. manufacturing activity picked up in May as demand for goods remained strong even with rising prices.

Market sentiment, however, has remained bearish due to the prevailing uncertainty caused by the pace of the U.S. Federal Reserve’s interest rate hikes, and the impact of the Russia-Ukraine war on food and commodity prices.

“There’s a lot of uncertainty. The market climbs a wall of worry and there’s a lot to worry about,” said Michael Ashley Schulman, chief investment officer at Running Point Capital in Los Angeles.

“If we have a recession it would be strange and unusual with nearly full employment, companies still hiring and huge demand for things,” Schulman added.

“The rising interest rates and inflation are just compressing valuations. You may like a company and it may be good and can continue to make profits but the valuation must still come down because your base interest rate is rising,” Schulman added.

Oil prices continued to strengthen following the move by European Union leaders to gradually phase out Russian oil even as China ended its stiff COVID-19 lockdown in Shanghai, which could bolster demand for crude in an already tight market.

The U.S. dollar rose against the euro, helped by upbeat U.S. economic data, and as the common currency remained under pressure following the hottest euro zone inflation on record that raised worries about the region’s growth outlook.

Gold prices inched up from a two-week low, supported by worries over rising inflation, although a stronger dollar and rising U.S. yields kept gains in check. 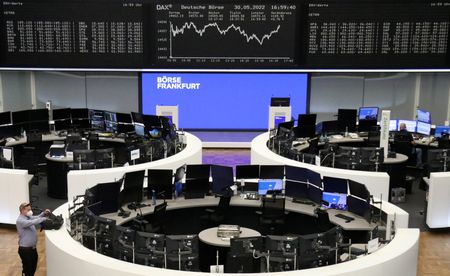