BERLIN (Reuters) -The German government’s council of economic advisers more than halved its growth forecast for Europe’s largest economy on Wednesday and flagged a “substantial” recession risk as a result of Russia’s invasion of Ukraine.

The advisers, whose forecasts guide the German government in setting fiscal policy, cut their 2022 economic growth forecast to 1.8% from 4.6%, adding output would not reach its pre-pandemic level before the third quarter of the year.

In 2023, Germany’s gross domestic product should grow by 3.6%, the four advisers said.

“We haven’t tried to calculate the exact probability of a recession,” council member Volker Wieland told a news conference.

“For example, we don’t know if there will be a supply freeze or whether the West can no longer avoid imposing an energy embargo. But these are possibilities. So, the risk is substantial,” Wieland said.

He added that unlike the U.S. economy, Germany still had not fully recovered from the coronavirus pandemic.

The advisers said Germany was on track for further economic recovery before Russia invaded its neighbour on Feb. 24.

“The Russian war of aggression against Ukraine has now drastically worsened economic conditions,” they said in a statement.

The war further frayed supply chains that had already been strained due to the COVID-19 pandemic, and a surge in natural gas and crude oil prices hurt companies and private consumption, they said.

A potential escalation of the conflict and additional sanctions could have a significantly greater impact on the German and European economies, the experts warned.

“We have to change course and use all levers to become less dependent on Russian raw material supplies,” Wieland told Reuters, adding he favoured extending the life of German nuclear power plants.

The country’s three remaining nuclear power plants are scheduled to be shut down by the end of the year, and the government has so far vehemently opposed extending their life-span as a way of reducing its reliance on Russian gas. 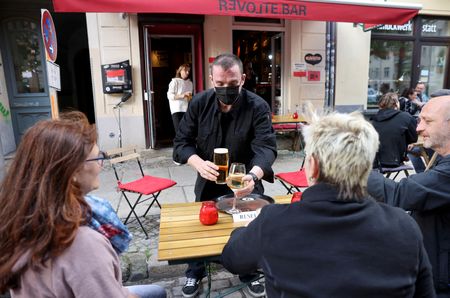 Philippine central bank to raise rates by 25 bps in June, some call for...

Target puts the squeeze on suppliers after inventories pile up

BioNTech sees up to 17 billion eur in vaccine revenue this...