(Reuters) -Gap Inc on Thursday raised its full-year net sales forecast for the second time, betting on hot demand for its Old Navy and Athleta clothing brands as socializing makes a comeback with easing pandemic curbs.

Its tie-up with rapper Kanye West also brought in a windfall for the retailer, as 75% of pre-orders for the Yeezy-Gap jacket came from brand new customers.

The Banana Republic owner has also been spending more on its digital business to tap the surge in online shopping, and said earlier in the day that it bought Drapr, a startup that lets customers try on clothes virtually.

Gap expects fiscal 2021 net sales growth of about 30%, compared with a prior forecast in the low-to-mid 20% range. Analysts expected a 24.3% growth, according to Refinitiv data.

The company, which has also been sharpening its focus on marketing and inclusivity, forecast annual adjusted profit between $2.10 and $2.25 per share from $1.60 to $1.75 earlier. Analysts expected $1.80.

Net sales of $4.2 billion were the highest second-quarter sales in over a decade, rising 29% to beat estimates.

However, Gap said it is investing in air freight as it deals with delayed inventory deliveries due to shipping congestions and pandemic-led factory closures in countries it sources from, echoing comments from rival Abercrombie & Fitch.

(Reporting by Praveen Paramasivam in Bengaluru; Editing by Devika Syamnath) 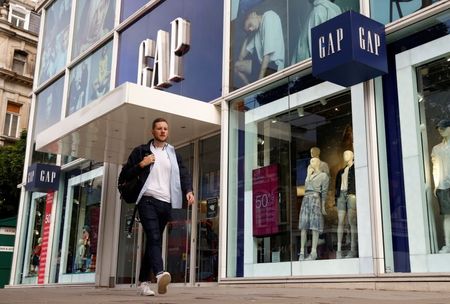 Aldi to hire more than 20,000 U.S. workers ahead of holiday season

AIG says it will use IPO to sell life and retirement...