BENGALURU (Reuters) – Funds recommended the lowest equity exposure this year in May, citing risks from the expected pull-and-push between reflation trades and dovish central banks, but most respondents in Reuters polls said a near-term correction in stock markets was unlikely.

While global shares have see-sawed in May, with technology-related stocks taking a hit, the MSCI world equity index breached an all-time high and European bourses were near record highs, helped by policymakers allaying inflation concerns.

Still, Reuters polls of 35 fund managers and chief investment officers in the United States, Europe and Japan, taken May 10-27, showed the lowest recommended equity allocations since December – averaging 48.7% of the model global portfolio, down from over a three year high of 49.8% last month.

“We have entered an uncertain and riskier environment – volatility is rising and equity-bond correlation is turning positive. It is important to stay cautious and lock in some gains in risk assets,” said Pascal Blanqué, group chief investment officer at Amundi, in Paris.

“Equities will do ok in absolute terms as long as inflation is not breaking the anchored territory. In stocks, investors should seek some protection against the bursting of the tech bubble. This means being cautious in interest rate sensitive shares, while preferring dividend yielding ones.”

When asked about the likelihood of a correction in global stocks over the next three months, 57% of fund managers, or 12 of 21, said it was unlikely. While the remaining nine said it was likely.

“We still believe that the return potential for equities is skewed to the upside on a one-year year time horizon,” said Craig Hoyda, senior quantitative analyst at Aberdeen Standard Investments.

“However, as the investment cycle matures, valuations rise and sentiment improves, prospective returns should steadily diminish.”

In response to another question, 70% of 20 asset managers said a hunt for yield trades would sway financial markets over the next three months rather than safe-haven bets.

“Many of the factors supporting risky assets are and will remain in place over the (European) summer. The reopening of economies will continue to support the recovery in earnings,” noted the investment team at Generali Investments Partners.

“On the other hand, we are aware of the increasing concerns over inflation and the possible implications on monetary policy. That said, we rather see these factors causing some volatility and possibly an acceleration of the rotation theme within equities towards value-exposed markets/sectors.”

Echoing those views, findings of a separate Reuters poll of about 300 equity strategists showed world stocks were predicted to rise modestly this year, with a near-term correction unlikely.[EPOLL/WRAP]

In the latest polls, all 21 wealth managers in response to another question said corporate earnings would rise for the rest of the year, including over 65% of them expecting a significant rise. None predicted company earnings to decline.

“We will see a significant rise in corporate earnings. However, that is unlikely to be across all sectors but more likely from those that were hurt the most due to the lockdown,” said Peter Lowman, chief investment officer at Investment Quorum.

“Given we are likely to see a pick up in consumer spending over the next few months there could be some significant upgrade in earnings for some of those consumer-led sectors.”

Treasury yields were up on Thursday, bolstered by expectations for more debt issuance following a report which showed U.S. President Joe Biden was likely to announce a $6 trillion budget, the largest spending since the second world war.

Fund managers suggested an increase to fixed-income allocations to the highest this year, accounting for 40.3% of the balanced global portfolio, from 39.5% in the previous month, which was the lowest since February 2019.

“Inflation is taking the driver’s seat of markets. It is difficult to see inflation just picking up for a few months and then returning to about 2% quickly. This is the start of a journey towards a period of higher inflation and lower growth compared to the current consensus,” added Amundi’s Blanqué.

“The consensus points to a Goldilocks scenario, buying into the view that this is a temporary inflation pick up, we think this is a risk. In the end, something structural is just something temporary that has lasted. Fears of inflation can become inflation.”

(Reporting and Polling by Tushar Goenka in BENGALURU and Fumika Inoue in TOKYO; Editing by Rahul Karunakar, William Maclean) 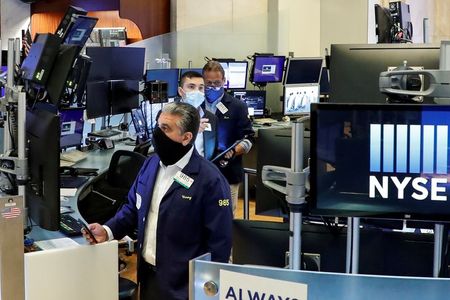