(Reuters) – For a second straight month, U.S. job growth proved to be bitterly disappointing in September https://www.reuters.com/world/us/us-job-growth-slows-sharply-september-unemployment-rate-falls-48-2021-10-08, coming in more than 300,000 jobs short of what many economists had penciled in. That’s after August’s report initially came in almost half a million jobs below economists’ consensus estimate.

But the 41-page Bureau of Labor Statistics report https://www.bls.gov/news.release/pdf/empsit.pdf features a vast range of data on the U.S. job market, and there is plenty of fodder for both the glass-half-full and glass-half-empty camps.

Not surprisingly, President Joe Biden cast his lot with the first group. “Jobs up, wages up, unemployment down. That’s progress,” he said after the release of the report.

Here are four data points that stood out.

The unemployment rate fell for a third straight month and by much more than was expected. Now at 4.8%, it is 10 percentage points south of its peak level in April 2020. Most economists agree it is an imperfect measure of the health of the labor market, but it still factors heavily in both the average person’s and typical policymaker’s reckoning of the economy, and it is improving at a pace not seen after most recessions. In fact, the latest level is already where Federal Reserve officials on balance had estimated it would be at the end of the year.

Graphic: A record drop in the long-term unemployed https://graphics.reuters.com/USA-ECONOMY/mopanjmxjva/chart.png

Among the many superlatives in the September report, this one jumped off the page: The ranks of the long-term unemployed, or those out of work for more than half a year, fell by the most ever last month, with 560,000 people leaving those rolls. Why? Simple – the money ran out. A $300 a week federal supplement to standard state jobless benefits expired near the start of the month. The emergency program had been on its way out since the early summer when 26 mostly Republican-led states ended the benefits early. But the final cull occurred last month. The question now is how many of those people transition back into the job market in the months ahead.

There’s no shortage of anecdotes about employers enticing people back to work with higher pay, but given how noisy the data has been during the coronavirus pandemic, finding evidence of a real trend emerging has been challenging. The Labor Department’s average hourly earnings data, however, has settled down in the past half a year and a new – and for now higher – growth pattern appears to be emerging. Average hourly pay rose 0.6% last month – again more than expected – and over the last six months has now averaged a gain of 0.5% per month. That’s roughly twice the monthly wage increase that prevailed before the pandemic.

Schools reopened this year in far greater numbers than a year ago when vaccines were still in the development stage and many public schools kicked off a year of hybrid or fully online instruction. So why did public school employment drop by 144,000 last month? Answer: It didn’t. And it’s all the fault of “seasonal adjustments.” September is typically the strongest month for hiring at U.S. public schools, with roughly 850,000 jobs added at the start of each school year from 2000 through 2019. Then came the pandemic and September job growth at public schools in the last two years was 15-20% below that trend – throwing off the Labor Department’s seasonal-adjustment models. 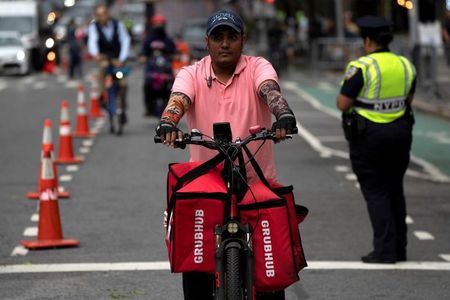 Uber looks to partner with other self-driving companies -CEO

Apple’s Cook says he will talk with U.S. official on immigration