Home Business For oil refiners, now is the summer of distillate content

(Reuters) – Refiners are planning to spend the summer increasing jet fuel and diesel production instead of gasoline, traders and analysts said, favoring what have historically been the least profitable parts of the barrel instead of the most profitable.

That is unusual and exemplifies the topsy-turvy nature of the global oil markets. Refining crude oil into diesel or jet fuel is currently more profitable than making gasoline due to an inventory squeeze in Europe following sanctions on Russia.

Normally, U.S. refiners ramp up gasoline output in the spring and summer to meet driving-season demand, while profitability for distillates like diesel or jet ebbs.

However, sanctions on Russian because of the war in Ukraine, pandemic-related refinery shutdowns that have reduced capacity, and an unexpected surge in natural gas prices have curtailed the volume of fuel refiners can produce, particularly in Europe, which relies on diesel as its primary motor fuel.

In the last two weeks, distillate exports have averaged more than 1.6 million barrels a day, the most since mid-2019, according to U.S. Energy Information Administration figures.

“The U.S. is now acting as the barrel of last resort for an Atlantic Basin that scrambles to find alternatives to shunned Russian crude oil and petroleum products,” said analysts at Citi in a Wednesday note.

That has boosted profits for U.S.-based refiners for distillates. Currently, the profit margin on distillates is nearly $60 a barrel, while the margin to make gasoline is $34. Over the past 10 years, the average at this time of year for distillates and gasoline was $26.24 and $27.48, respectively. (GRAPHIC: Refining Margins https://graphics.reuters.com/USA-ENERGY/zgvomlbwevd)

“U.S. refineries may have little incentive to switch to higher gasoline yields as the differential between RBOB and heating oil remains wide,” Citi wrote.

MISMATCHES AROUND THE NATION

Even as export demand has risen, not all parts of the U.S. are seeing the same benefit.

Gulf Coast refineries, which account for roughly 45% of the nation’s refining capacity, are operating at 94% utilization, according to EIA data.

However, in the Midwest demand from local farmers has been weak due to unseasonably cold weather that has delayed planting season. As of Sunday, planting was 4% complete, below the five-year average of 6%, according to the U.S. Department of Agriculture.

“It’s a mismatched market because so many diesel barrels are needed elsewhere in the world and we have too much inland, driving physical prices down,” said one products broker.

Distillate stocks in the Midwest, known as PADD 2, are only 0.4% below where they were a year ago, even though nationwide distillate inventories hit lows not seen since May 2008 this week. Chicago ultra-low-sulfur diesel was trading 21.5 cents per gallon below diesel futures on Tuesday; at this time last year, it was 5 to 8 cents above that benchmark.

On the U.S. East Coast, home to some of the world’s busiest airports, jet fuel traded at more than $100 per barrel above Brent crude futures as inventories touched 32-year lows.

Whether the market is rebalanced will depend on demand. The rising cost of diesel and gasoline has started to reduce U.S. consumption, as demand for both fuels has recently dipped below the five-year average – though not by much. 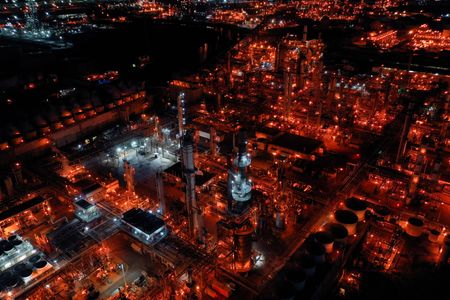 McDonald’s, Starbucks, Coke and Pepsi all halt sales in Russia