(Reuters) -A majority of FirstGroup shareholders on Thursday backed the bus and train firm’s 3.3 billion pound ($4.7 billion) sale of its U.S. assets to EQT Infrastructure, in a blow to activist investor Coast Capital which led opposition to the deal.

Some 61.3% of votes cast at the shareholder meeting supported the sale of FirstGroup’s largest divisions, whose activities include operating thousands of yellow school buses. The British company needed the support of at least half of all votes cast.

Top investor Coast launched a campaign a couple of weeks ago to block the sale to the Swedish private equity fund, arguing it undervalued the assets, and demanded FirstGroup give more of the proceeds to shareholders.

U.S. hedge fund Coast was joined by number two shareholder Schroders in the minority opposing the deal on Thursday.

FirstGroup, which plans to use most of the sale proceeds to pay down debt and contribute to its UK pension schemes, has earmarked 365 million pounds to be distributed to shareholders.

Peel Hunt analyst Alexander Paterson said more could be handed out to investors as the group’s new Transpennine Express contract in northern England was much less costly than under a worst case scenario.

FirstGroup plans to convene a general meeting, if necessary, after the deal closes to seek investors’ approval over the proposed return of cash to shareholders.

“A share buyback may be more tax efficient or preferable for some shareholders and if that is the chosen route, it would probably require a shareholder vote,” Paterson said.

The deal is expected to close in the second half of this year.

While EQT welcomed the vote, Coast founding partner James Rasteh said he was concerned fellow shareholders made their decision without complete information and the fund was considering its options.

With the sale of First Student and First Transit, the Aberdeen-based company will focus on its UK networks.

It is also still looking for a buyer for its Greyhound U.S. bus operations.

Coast had been pressuring FirstGroup to sell its U.S. assets since 2019, with FirstGroup eventually starting a formal sale process in early 2020.

Thursday’s result marks a second failure for Coast, which in 2019 tried and failed to oust former FirstGroup Chairman Wolfhart Hauser and overhaul the board.

Shares in the London-listed company, which have made little progress since the sale announcement last month, were up 0.4% at 1520 GMT. 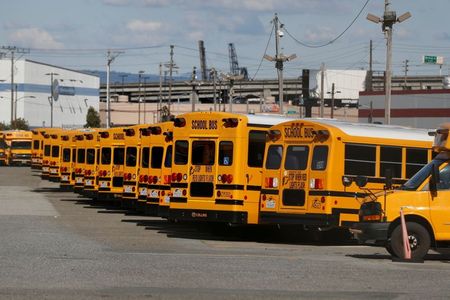 Italy, UniCredit in deadlock over MPS as deadline nears