(Reuters) – A federal judge on Wednesday reversed the U.S. government’s approval of ConocoPhillips’ planned $6 billion Willow oil development in Alaska, citing problems with its environmental analysis, according to court documents.

The ruling is a fresh blow to a massive drilling project that Alaskan officials hoped would help offset oil production declines in the state.

ConocoPhillips spokesperson Dennis Nuss said the company would review the decision and evaluate its options for the project.

In her order, Alaska District Court Judge Sharon Gleason said she was vacating the U.S. Bureau of Land Management’s approval of the development in part because the agency failed to include greenhouse gas emissions from foreign oil consumption in its environmental analysis. It also “failed to adequately analyze a reasonable range of alternatives” for the project, she wrote.

Gleason also said the U.S. Fish and Wildlife Service did not outline specific measures to mitigate the project’s impact on polar bears.

The Interior Department, which oversees the Bureau of Land Management and Fish and Wildlife Service, would not comment on the ruling.

Alaska Gov. Mike Dunleavy said the order was a blow to the his state because the project would create thousands of jobs.

“This is a horrible decision,” he said in a statement. “We are giving America over to our enemies piece by piece.”

Willow, planned for the National Petroleum Reserve in Alaska, was approved by the Trump administration last year as part of its push to ratchet up fossil fuel development on federal lands.

The decision was followed promptly by lawsuits from environmental groups, which argued in part that the government had failed to take into account the impact that drilling would have on wildlife.

Those same groups harshly criticized the administration of President Joe Biden for defending the project’s approval in court, saying it was at odds with his climate change agenda.

ConocoPhillips said in June that the Willow development could begin producing oil in 2027. Willow holds about 600 million barrels of recoverable oil and could produce up to 180,000 barrels per day.

(Reporting by Nichola Groom in Los Angeles, Yereth Rosen in Anchorage and Gary McWilliams in Houston; Editing by Chris Reese and Gerry Doyle) 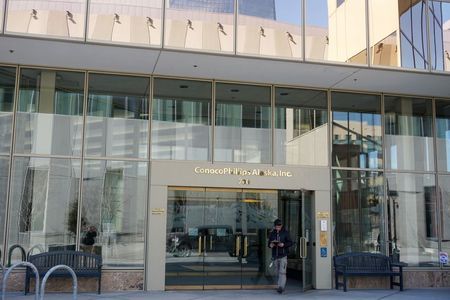 Look, up in the sky – it’s a flying Cadillac! GM unveils futuristic vehicle

BOJ offers virtual tour as headquarters off limits amid pandemic