(Reuters) – Federal Reserve policymakers are penciling in the possibility of earlier interest rate hikes than they thought would be needed just a few months ago, as inflation continues to soar and the economy picks up speed.

The shift comes as President Joe Biden nears a decision on whether to keep Jerome Powell as Fed chair for another term, or to elevate Governor Lael Brainard to that post instead. Earlier this week Biden signaled he could make an announcement on Friday.

Whoever Biden picks will face the thorny task of steering toward the Fed’s two goals, stable prices and full employment, when they appear to be increasingly in conflict.

Both Powell and Brainard have said they believe the current inflation surge will subside next year as supply chains are repaired, and have argued the Fed should keep interest rates at rock bottom to give more time for the millions of Americans who lost employment or left the workforce during the pandemic to get a job if they want to.

Many of their Fed colleagues have signed on to that view, but continued rising prices are challenging it.

On Thursday, one of the U.S. central bank’s most reliable policy doves said he is “more open-minded” to raising interest rates next year than he was six months ago. A 2022 interest rate hike, Chicago Fed President Charles Evans said, could be appropriate if inflation continues to stick despite his expectations to the contrary.

“I wouldn’t describe it as hair on fire or anything like that,” Evans told reporters after a talk. “But I would say, I have to admit, it’s gone on longer, things are not quite as clean as I was hoping for; patience is hard, and there might be a little bit of movement sooner than I’m thinking, or it could be that I’m just flat out wrong and we need to move.”

Separately, Atlanta Federal Reserve President Raphael Bostic said he believes the U.S. central bank could start raising interest rates in the middle of next year, based on the jobs outlook.

“Right now, our projections suggest that by the summertime of next year, the number of jobs that we have in the economy will be pretty much where we were pre-pandemic,” Bostic said in an interview with NPR’s Marketplace. “And at that point, I think it’s appropriate for us to try to normalize our interest rate policy.”

Bostic previously said he was among the half of Fed policymakers who, as of September, thought a rate hike would be appropriate by next year, but his public embrace of a mid-2022 liftoff is new.

At their policysetting meeting last month, Fed officials decided to begin withdrawing support for the economy by gradually reducing what had been $120 billion in monthly asset purchases down to zero by next June.

Some policymakers have since called for a hawkish turn and a quicker taper so as to position the Fed for an even earlier rate hike should it be needed.

But traders are already adjusting their expectations, with interest-rate futures now pricing in a better-than-even chance of three rate hikes before the end of next year.

In September only half of the Fed’s policymakers thought they would need to begin to raise rates next year, with the other half seeing 2023 as more likely for the first rate hike.

The Fed will deliver a better read on how far policymakers’ views may have shifted when it releases fresh quarterly forecasts on Dec. 15, when its next policymaking meeting wraps up. 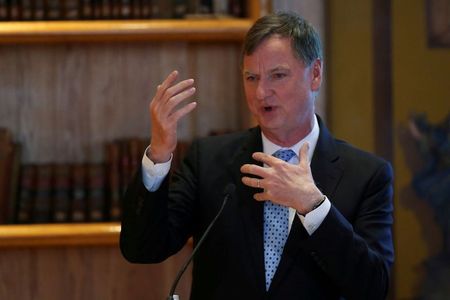