(Reuters) – The Federal Reserve may move to begin reducing its support for the economy next month despite a sharp slowdown in jobs gains last month as the latest U.S. surge in COVID-19 cases crested and began to recede.

Though employers added just 194,000 jobs in September, a report from the U.S. Labor Department showed, upward revisions to prior months’ data meant that all told the economy has now regained half of the jobs deficit it faced in December, compared with pre-pandemic employment levels.

Fed Chair Jerome Powell said last month that he’d only need to see a “decent” September U.S. jobs report to be ready to begin to taper in November.

“I think it just barely clears Powell’s hurdle of ‘decent,'” said Bank of the West economist Scott Anderson. “A November taper announcement is still the most likely path for the Fed.”

Others agreed. Kathy Lien, Managing Director, BK Asset Management, said the “Federal Reserve made it very clear that they don’t need a blockbuster jobs report to taper in November,” and thought the central bank “remains on track.”

There was a muted market response with the benchmark S&P 500 flat in morning trading on Friday while the dollar was down less than 0.05%. Benchmark 10-year Treasuries, meanwhile, were higher at 1.6%.

Some analysts said that the jobs report made the Fed’s path ahead more complicated.

“The Fed was hoping for a number large enough so that their decision to begin tapering last month would be an easy one,” said Northern Trust economist Carl Tannenbaum. “Now, the discussions on November 2-3 may be more difficult; and the market will have to deal with some additional uncertainty.”

The Fed has been buying $120 billion of Treasuries and housing-backed bonds each month since December to stem the economic fallout from the coronavirus pandemic, and had promised to keep doing so until there was “substantial further progress” toward its goals of 2% inflation and full employment.

Since then the surge in demand as the economy reopened has pushed up prices. Ongoing supply bottlenecks look set to keep inflation well above 2% through the end of the year and into 2022, Fed forecasts and others suggest.

On the labor market front, more of the deep hole punched in the labor market after the pandemic shutdowns is getting filled in. In December, the U.S. economy was supporting about 10 million fewer jobs than it had pre-pandemic; as of September, Friday’s report shows, the gap was down to about 4.97 million.

Once policymakers do begin to phase out their bond-buying program, it’s unclear how quickly policymakers may then move to raise interest rates from their current near-zero level.

Analysts at TD Securities said the weaker reading “should temper some of the enthusiasm for 2022 rate hike pricing.”

Futures on the federal funds rate, which track short-term interest rate expectations, on Friday priced in a quarter-point tightening by the Federal Reserve either by November or December next year, more or less the same before the release of the payrolls report.

Fed policymakers have said they won’t lift rates unless the economy reaches full employment, and inflation looks on track to stay above 2% for some time.

One overarching question is whether COVID-19 cases stay on the wane as in recent weeks, or make a resurgence in the winter big enough spook consumers and wrongfoot the recovery.

Another is the path of inflation, which Fed policymakers expect to subside next year but, if not, could force the central bank to make the uncomfortable decision to raise interest rates before the labor market is fully healed.

And a third is the extent to which the labor market can make up lost ground.

Fed policymakers in September had expected unemployment to fall to 4.8% by the end of this year, a benchmark that Friday’s report showed it had already reached last month.

Given the volatility in the number of workers opting to participate in the labor market, ‘it isn’t clear if this is going to ‘stick,'” Jefferies’ economist Aneta Markowska wrote in a note.

But to most analysts, and perhaps especially those with no love lost for a ballooning Fed balance sheet that’s $8.5 trillion and counting, the path to taper is clearer than ever.

The Fed, said Rick Rieder, BlackRock’s Chief Investment Officer of Global Fixed Income and Head of the BlackRock Global Allocation Investment Team, “probably will (and should) continue its plan to taper excessive liquidity-accommodation in the very near future.” 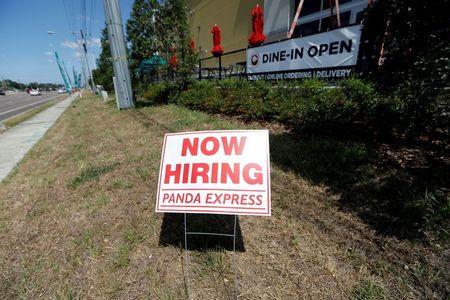 TikTok says it will exit Hong Kong market within days

United 777 plane flew fewer than half the flights allowed between...