LONDON (Reuters) – What began as an awareness campaign in 2010 has in just over a decade grown into Fairphone, which last year sold thousands of phones made from responsibly sourced and recycled materials.

Although about 99% of the phones the Netherlands-based firm makes are sold to individuals, corporates are starting to show interest, its Chief Executive Eva Gouwens told Reuters.

Recycling is an important feature of the energy transition where companies, governments and individuals look to cut their carbon footprints and meet stringent emissions targets.

And responsible sourcing has for some years been a major theme, particularly in the technology and auto sectors, where the spotlight fell on human rights abuses and child labour at artisanal mines in Democratic Republic of Congo (DRC).

“After a few years of campaigning we realised we are not creating an alternative … We decided to become a part of this industry, become a company,” Gouwens said in an interview for the Reuters Next conference. “Our target is for 70% of our materials to be fairly sourced by 2023.”

“We have a programme in the DRC where we work with the Fair Cobalt Alliance to improve the situation in artisanal mines,” Gouwens said of Fairphone, which sources its cobalt from several countries.

The Fair Cobalt Alliance aims to make artisanal mines safer, minimise their environmental impact and create suitable working conditions for the men and women working at these sites

Gouwens said the supply chain was complex and that the cobalt going into the rechargeable batteries used for phones was not “100% traceable”.

“If you keep the cobalt separate throughout the whole supply chain, it would be super costly and the (artisanal) miners wouldn’t benefit from that.”

When Fairphone started in 2013, the aim was to appeal to the “darker green” audience, people prepared to compromise on the functionality and contribute to sustainability.

It is now aiming to expand into what Gouwens calls the “lighter green” area, consumers interested in sustainability and fairness, but less willing to compromise on functionality.

“In the whole lifetime of Fairphone we have sold more than 300,000 devices,” Gouwens said.

Fairphone made a profit of 2 million euros ($2.27 million)last year.

To watch the Reuters  Next conference please register at https://reutersevents.com/events/next 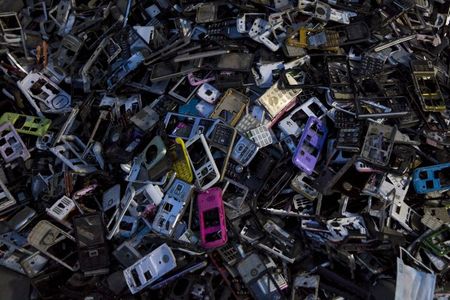