WASHINGTON (Reuters) – Democrats in the U.S. House of Representatives were pushing ahead on Thursday with a vote on President Joe Biden’s $1.75 trillion domestic spending bill, after a lengthy wait on a Congressional Budget Office report.

The CBO found that the bill would increase the deficit, although the nonpartisan arbiter noted that it did not take into account additional tax enforcement called for in the bill. The White House and Democrats produced their own figures that found the bill paid for itself.

The research agency, seen as the gold standard for legislative analysis, predicts that Biden’s “Build Back Better” bill would increase the deficit by $367 billion from 2022 to 2031. But the CBO cautions that the estimate does not include any additional revenues from a provision intended to enhance the Internal Revenue Service’s ability to collect tax revenues.

The White House economic team has produced its own forecast showing the legislation reducing – not increasing – the federal deficit by $36.3 billion over a decade. The sum is based in part on an estimate that the IRS provision would raise $400 billion.

The White House also produced an estimate that combines separate forecasts from the CBO, the Treasury and the bipartisan Joint Committee on Taxation, an arm of Congress that assesses the tax provisions in legislation.

The CBO/Treasury/JTC estimate forecasts a $112.5 billion deficit reduction over the next decade, based in part on a bigger savings on the cost of Medicare prescription drugs and lower spending estimates on provisions including childcare, universal preschool and housing, compared with the White House estimate.

Republicans in Congress have pointed to more worrisome forecasts from independent sources including the Wharton School at the University of Pennsylvania.

The Penn Wharton Budget Model estimates that the legislation as written would produce a $274 billion deficit over a decade – smaller than the one forecast by the CBO. But if the bill’s temporary provisions were made permanent, Penn Wharton warns that spending would soar to $4.6 trillion and increase the federal debt 24.4% by 2050. 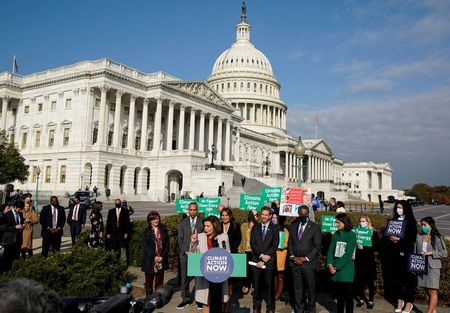