WASHINGTON (Reuters) – The U.S. Congress is locked in a standoff that risks triggering a financial and economic meltdown if lawmakers don’t raise a limit on government borrowing before Oct. 18, the day the U.S. Treasury could run out of cash for paying government bills.

The drama’s central players are Senator Mitch McConnell, who leads the Republican minority in the Senate and has vowed to obstruct normal legislative efforts to raise the debt ceiling, and Senator Chuck Schumer, leader of the chamber’s Democratic majority and an ally of President Joe Biden.

Here are some ways the battle might play out in the Senate:

Schumer has twice tried to win approval of a debt ceiling increase under regular legislative procedures and is set to try again on Wednesday.

Prior attempts were blocked by McConnell’s Republicans, who have used the Senate’s filibuster rule which requires a 60-vote majority to approve most legislation. The 100-member chamber is evenly split and Democrats can only muster 51 votes when Vice President Kamala Harris casts a tie-breaking vote.

If Schumer’s attempt on Wednesday fails, as expected, the Democrat could switch to using an arcane legislative process known as reconciliation. That bypasses the filibuster and Democrats would only need a simple majority to win. This path carries its own risks, however, as congressional rules would require a lengthy process https://www.reuters.com/world/us/how-could-us-senate-democrats-raise-debt-limit-their-own-2021-10-04 in both the House of Representatives and Senate.

McConnell could lift the Republican filibuster blockade in the vote on Wednesday or in subsequent days if Schumer sticks with his current strategy and keeps bringing up the failed bill or a similar one for votes.

Financial market investors have so far been largely sanguine about the risks, betting that Washington won’t manufacture a financial crisis by defaulting on its debt.

But as Oct. 18 approaches, markets could swoon, ramping up pressure on McConnell.

Democrats and Republicans have periodically sparred over the debt ceiling, particularly over the last 10 years as Washington has grown more polarized.

In the past, a minority party has often used the debate as leverage to pass other legislative priorities, such as deficit reduction. On Monday, McConnell has said his party has no demands and merely wants Democrats to use the reconciliation process.

Schumer could counter by moving to ban the use of the filibuster on debt ceiling bills, said William Hoagland, a former Republican Senate staffer now at the Bipartisan Policy Center.

There are risks, however. Changing Senate rules would require every vote the Democrats can muster and some prominent members of the party are diehard supporters of the filibuster.

While not seen as a likely scenario, if Washington exhausts the few remaining tools it has for coping with its $28.4 trillion borrowing limit around Oct. 18, it will only have incoming tax receipts for paying its bills. And because it currently borrows more than 20 cents for every dollar it spends, the Treasury would start missing payments https://www.reuters.com/business/standing-precipice-washington-courts-debt-limit-catastrophe-2021-09-29 owed to lenders, citizens or both.

Shock waves would ripple through global financial markets. Domestic spending cuts would push the U.S. economy into recession as the government misses payments on everything from Social Security benefits for the elderly to soldiers’ salaries. 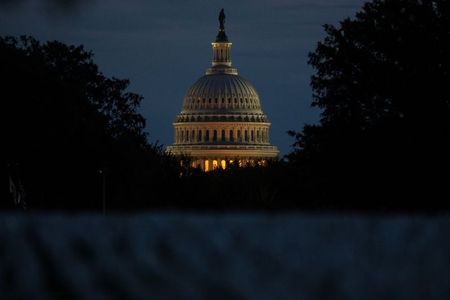 By Elizabeth Culliford and Nivedita Balu ...

DOW suffer from volatility as per futures for Thursday