WASHINGTON (Reuters) – As the race for the Federal Reserve’s next top regulatory official heats up, one thing is certain: whoever gets the job will have a jam-packed agenda tackling the gamut from capital rules and fair lending to digital assets and climate change.

The latest development in the search for the Fed’s vice chair of supervision came on Tuesday when the Wall Street Journal reported the White House was considering Sarah Bloom Raskin, a former Fed governor and former Treasury Department official, for the role.

The Fed’s supervision chief Randal Quarles stepped down from that role in October and will leave the central bank at the end of the year. While the White House last month said it was renominating Jerome Powell as Fed chair, it punted on who would take up the powerful supervision role overseeing Wall Street’s biggest lenders.

Analysts and Washington insiders had long said the top contender for the role was fellow Fed governor Lael Brainard, but she will be stepping up to the Fed’s other vice chair role focused on economic and monetary policy.

Each of the contenders would have their own take on the role and, in turn, would have to win the backing of the Fed chair and board, both of which are also in the balance, to push through major changes.

But any Democratic pick for the supervision post, whether centrist or progressive, will be expected to chart a new course and tackle a number of looming and in some cases thorny issues, say analysts. These include:

Over the past four years, Quarles led a review of regulations introduced following the 2007-2009 global financial crisis, arguing they were too blunt and onerous. Democrats accused Quarles of saving Wall Street billions of dollars while increasing systemic risks.

Among the most contentious changes were revisions to the “Volcker Rule” curbing speculative bank investments; scrapping a requirement for big banks to hold capital against certain swap trades; and stripping the Fed of its power to fail banks on their annual “stress tests” based on subjective concerns.

The new supervision chief will have to decide whether they want to revisit these changes, a potentially time-consuming and fraught exercise.

Climate change, a top policy priority for Democrats, is expected to rapidly rise on the Fed agenda under new leadership.

So far, the Fed has asked lenders to explain how they are mitigating climate change-related risks to their balance sheets, with the industry expecting to progress to a formal climate change scenario analysis in 2023, Reuters has reported.

Those projects are expected to accelerate. The big question will be whether Quarles’ successor pushes for restrictions or stiffer capital requirements on banks with significant exposures to polluting industries or other climate-specific risks.

The Fed may also sign off on climate risk lending guidance for big lenders which Acting Comptroller Hsu has said banking regulators are working on.

Quarles’ successor will also have to tackle a regulatory blueprint for “fintech” companies that are quickly chipping away at the traditional financial sector.

The Fed is exploring how banks intersect with fintechs, particularly with smaller lenders that may outsource more services and infrastructure. Fintechs are also lobbying the Fed for access to its payments system.

While other banking regulators have worked for years to bring fintechs under their regulatory umbrella, the Fed has resisted, fearing doing so could create systemic risks. But as the sector continues to balloon, the Fed is expected to act.

“You hear a lot about the promise of fintech, but they should also be looking very closely at the risks,” said Tim Clark, a former Fed official who now works with the advocacy group Better Markets.

On a related front, the Fed is currently studying the implications of a central bank digital currency. With studies from the Fed Board and Federal Reserve Bank of Boston expected soon, the central bank is trying to weigh the risks and advantages of such a product, which could expand its reach and help speed money transfers.

Banks’ annual “stress test” health checks are likely to be top of the list of Quarles’ changes that Democrats will want to be reviewed.

Quarles tried to make the tests more transparent and predictable for banks, including scrapping a “qualitative” objection that allowed the Fed to flunk lenders on subjective grounds. Democrats say under Quarles the tests became too easy.

Jaret Seiberg, an analyst with Cowen Washington Research Group, wrote in September that stress test changes would likely come in 2023, and could include directing banks to reserve eight quarters of expected dividends, instead of the current four, and potentially reviving the qualitative objection.

Another issue on the table is the supplementary leverage ratio, a rule created after the decade-ago crisis requiring banks to hold capital against assets regardless of their risk.

The Fed had to temporarily ease that rule in the midst of the pandemic as a glut of bank deposits and Treasury bonds drove up capital requirements on what are viewed as safe assets.

Despite intense bank lobbying, the Fed let that relief expire in March but promised to review the overall rule. The Fed has yet to publish a proposal, leaving the job up to Quarles’ successor.

The central bank will also play a key role in a long-awaited overhaul of the Community Reinvestment Act rules which promote lending in lower-income communities. The Fed, which shares responsibility for writing the rules with other bank regulators, hopes the rules can be updated to reflect the growth in online banking, while still ensuring lenders make meaningful contributions to the poorer areas they serve.

Efforts to update the rules under the Trump administration faltered after regulators could not agree on a path forward. 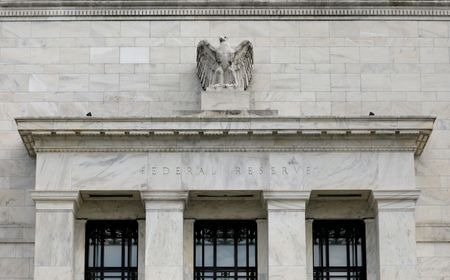 Toshiba chairman says he may leave once problems fixed – WSJ

(Reuters) -Nvidia Corp is preparing to abandon its purchase of...